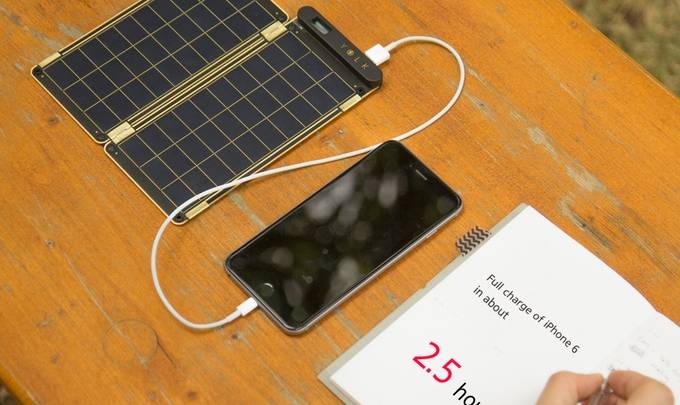 Apple might add solar charging features to its products at some point in the future, but we’re not quite there yet. Luckily for those iPhone 6 owners looking to charge their devices using the sun’s energy, there’s a crowd-funding project that’s taking Kickstarter by storm by promising to be the world’s thinnest and lightest solar charger in the world.

DON’T MISS: Some of the best Amazon Prime Day deals are still available

Called Solar Paper, the project has already convinced more than 2,400 backers to pledge almost $350,000, or seven times its original goal. The funding campaign still has 34 days to go, and the first Solar Paper products should start shipping at some point this September.

The cheapest Solar Paper charger will cost around $120 when it becomes commercially available, but sells for as little as $69 on Kickstarter. Adding more than two solar panels to Solar Paper is possible, but will cost you extra.

The device measures just 19 x 9 x 1.1cm when folded, and weighs 120g. In addition to the iPhone 6, Solar Paper can charge a variety of devices that can be charged using a USB connection, including Android handsets, GoPro cameras, tablets, and other gadgets. However, bigger devices might require additional solar panels, so make sure you select the appropriate perk for your device if you plan to buy a Solar Paper.

According to the video below, the iPhone 6 can be fully charged in 2.5 hours using a Solar Paper device, which is rather impressive.