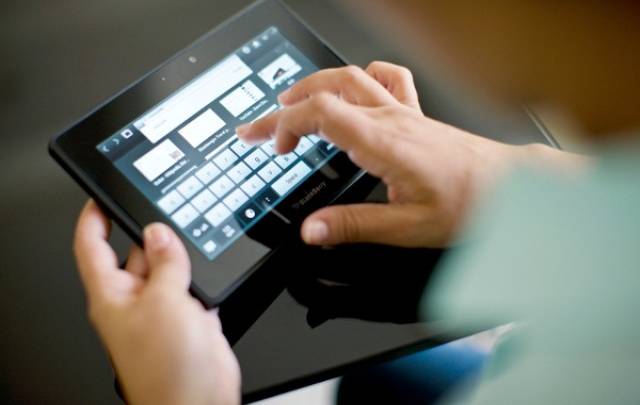 British electronics distribution specialist Context dropped a bit of a bombshell on Tuesday by claiming that Research In Motion’s (RIMM) PlayBook tablet outsold Apple’s latest iPad during the last two months of the 2012. Of course, Apple (AAPL) has its own retail stores in the UK where most in-store sales likely occur, but the sales channels monitored by Context still make up most of the electronics distribution in the UK.

According to Context, the PlayBook shifted 160,000 units and the latest-generation iPad 113,000 units over the Christmas period, giving RIM a fairly substantial lead. All iPad models combined sold 203,000 units. Of course it’s important to note that the recommended retail price of the PlayBook was £129 while the fourth-generation iPad starts at £399, but this data emphasizes an important shift in the market.

The PlayBook’s strong channel performance is only the latest sign of how rapidly the cheap tablets are gaining market share in the UK — last week, sales updates from Argos and Carphone Warehouse stressed the same theme.

Interestingly, The Register points out that one of the reasons for the strong PlayBook sales may be the big profit margin RIM offers for retailers for pushing its tablet. This could very well be a stratagem RIM will also employ when it launches its new BlackBerry phones in the UK, possibly within one week.

If the PlayBook is still commercially viable in the UK after the drubbing it took a year earlier, then the new BlackBerry handsets also have a shot at redemption. British consumers have always been the most pro-RIM people in Europe by a fairly large margin; BlackBerry smartphones’ market share topped 20% in the UK two years ago.[bgr-post-bug]