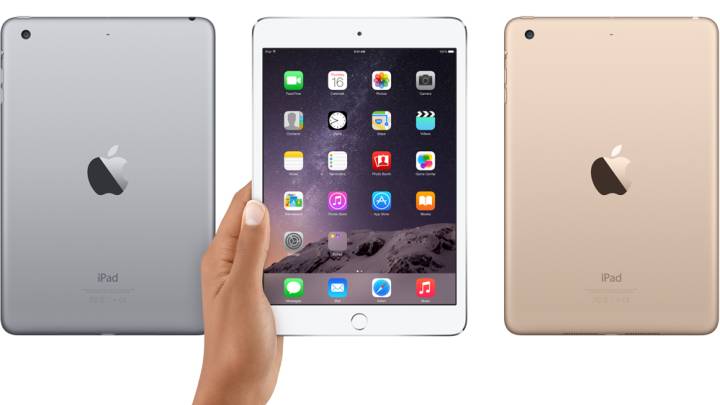 There’s no getting around the fact that iPad sales are slumping. During Apple’s most recent quarter, iPad sales dropped by over 18%. At the same time, year-over-year iPad sales have dropped for eight straight quarters now.

As far as the iPad Mini 4 goes, the rumor mill suggests that Apple’s next-gen iPad Mini will finally be graced with some substantive enhancements. In addition to a thinner design that will look a little bit like a shrunken iPad Air 2, the device will come with an 8-megapixel rear facing camera and, one can only assume, upgraded internals. Some previous leaked casings have suggested that the iPad Mini 4 may be as thin as 6.13mm.

All of this should come as welcome news for prospective iPad Mini buyers given that Apple’s iPad Mini 3 update last year was ho-hum at best.

The star of Apple’s 2015 iPad lineup, though, may very well be the long-rumored iPad Pro. With a display measuring in at 12.9-inches, the iPad Pro will be a gargantuan device that will likely be powered by a blazing fast A9 processor.

Much like the iPhone 6s, some reports have suggested that the iPad Pro will feature a Force Touch display. Even more intriguing is that the will come with support for a bluetooth connected stylus. With such a huge display, the device will also support split-screen multitasking and will be able to run two full-size portrait iPad apps side by side.

As we reported earlier in the year, another rumored iPad Pro feature will be support for multiple users, a feature some iPad users have been clamoring for for years. In practice, this means that multiple users will be able to use the same device with their own settings, data, and apps saved under their own unique logins.

The base model iPad Pro will likely come with 64GB of storage and an option for LTE connectivity. Price wise, the device may be as much as Apple’s recently introduced MacBook, this according to a recent report from 9to5Mac.

With respect to a launch window, Apple will reportedly try to get the iPad Pro into stores by the end of November. As far as the iPad Mini 4 is concerned, we haven’t heard too much about a potential release date, but don’t be surprised if it’s available for purchase as early as October.

Taking a step back, it’ll be interesting to see if a larger-screened iPad at a higher price point will be the magic sauce needed to inject a bit of life into tepid iPad sales.

Now that you know what to expect from Apple’s iPads, be sure to read about everything coming in Apple’s new iPhone 6s.