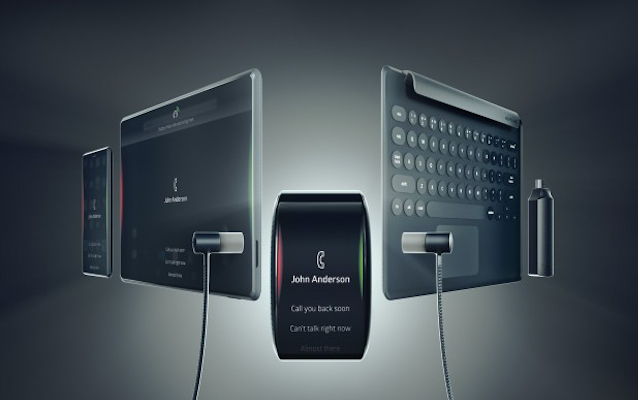 Neptune Suite is the name of a new smartwatch project currently seeking funding on Indiegogo, but this time around, the device is looking to redefine computing. The campaign is quite popular too, as it’s fast approaching the $1 million in pledges mark, even though it’s been up on the crowd-funding site for just two days. The project’s original goal was raising $100,000 by April 14th.

Unlike other smartwatches that need pairing with other smarter gadgets, mainly smartphones, to deliver advanced functions, the Neptune Hub is meant to be a standalone computer that can offer a variety of features and, most interestingly, share its smarts with accessories that can be turned into smartphones and tablets.

When more screen real estate is needed, the Neptune Hub can be paired with additional, specialized, accessories, including a 5-inch HD Pocket Screen that instantly becomes a smartphone when in proximity of the Hub. The device also has front-facing and rear camers.

Taking things even further is the Tab Screen, a 10-inch Full HD device that becomes a tablet when connected to the smartwatch, offering access to a 720p front-facing camera.

The Neptune Dongle is an HDMI dongle that can turn a computer monitor or TV into a screen for the Hub.

Finally, a Neptune Keys accessory offer users access to a full keyboard that can be used both with the tablet and dongle.

The device runs Android 5.0 Lollipop across screens, and should offer users a familiar experience no matter how they’d use Neptune Suite gadgets.

The first question that pops to mind when looking at what the Neptune Hub wants to offer is battery life – after all, the smart Apple Watch can’t yet deliver the kind of battery life we want. But the company behind the project says that the Hub is going to require less power than other devices since it doesn’t pack a large LCD or OLED display – the device should have a 1,000 mAh battery.

Furthermore, the Pocket Screen and Tab Screen come with 2,800 mAh and 7,000 mAh batteries, which can act as external battery packs for the Hub. Neither the smartphone- and tablet-like devices contain actual smartphone and tablet components that consume power, thus having more space for batteries.

The final Neptune Suite Package, including all the devices mentioned above, should retail for $899 when it launches commercially. Buyers preordering one on Indiegogo can save anywhere from $150 to $300, depending on chosen tier, and the Neptune Suite should launch at some point in February 2016.

A video showing this interesting smartwatch concept in action follows below.