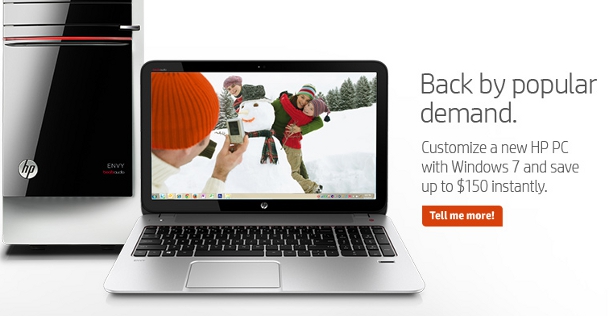 Public opinion on Windows 8 seems to be in an unending state of flux, but at least one PC manufacturer has decided to take a stand on the matter. HP has announced via the front page of its website that Windows 7 computers are “back by popular demand,” signaling yet another delay to what Microsoft must have assumed would be an inevitable shift to the latest operating system.

Not only is HP now openly advertising Windows 7 PCs, the company is even offering up to $150 in savings to any customers that order a computer with the last-gen OS pre-installed. With reports coming in that even Microsoft employees are underwhelmed by the performance of Windows 8, HP’s marketing decision comes as less than a surprise. If there was ever a sign that Windows 9 couldn’t come soon enough, this is it.