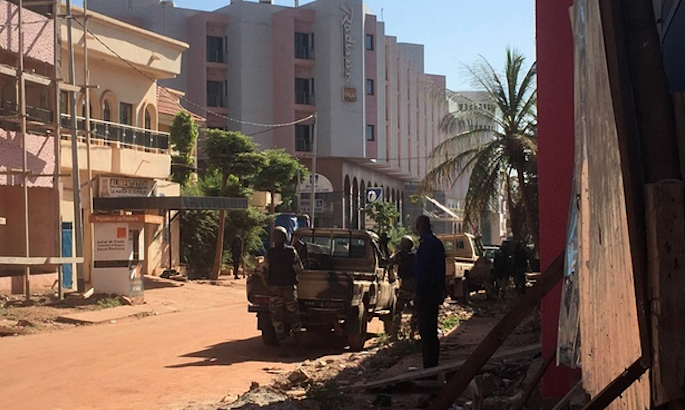 As many as ten gunmen stormed the Radisson Blu hotel, Reuters reports, firing shots and shouting “Allahu Akbar,” or “God is great” in Arabic.

The company that runs the hotel said in a statement that two people are holding 140 clients and 30 employees.

Apparently some hostages were released after they were able to recite verses from the Koran. According to French newspaper Le Monde, the Malian security ministry said at least three hostages had been killed.

The Radisson Blu is located near government ministries and diplomatic offices and has 190 rooms. “This is one of the biggest hotels in Mali and because of the mining conference, I believe there are many people inside,” Alfousséni Sidibe, an office worker in Bamako told The Telegraph. “The security police and gendarme are all rushing there. Life in Bamako is normally peaceful, so this is a big shock for everyone.”

1,000 French troops and many UN troops are still present in Mali; The Telegraph says, after the northern part of the country was occupied by Islamist fighters linked to al Qaeda for most of 2012.

ISIS is yet to claim the attack on the Radisson Blu hotel, which is currently surrounded by Malian police forces. The U.S. Embassy said on Twitter it was “aware of an ongoing active shooter operation at the Radisson Hotel,” advising American citizens to stay indoors.

A week ago, an ISIS cell in Paris killed 129 people and injured more than 350 people in attacks on various targets in the French capital.

UPDATE: After several hours, most of the hostages were rescued, BBC reports, as special forces stormed the hotel. At least three people died, and two soldiers were injured.