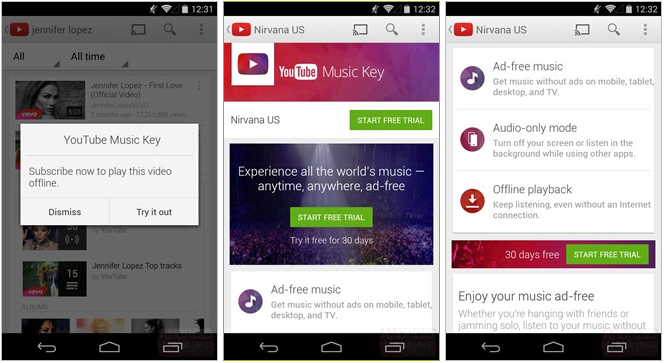 Google’s rumored music streaming service based on YouTube is finally taking shape, with Android Police having discovered the official name of this upcoming Google product, as well as details about how it’s supposed to work along the soon-to-be-rebranded Google Play Music All Access.

The publication says Google is getting ready to offer users a YouTube Music Key service that’ll give them ad-free music and audio-only playback (including offline playback support) for just $9.99 per month after a 30-day free trial period. Subscribers will also get access to Google Play Music Key, which is what the awfully named Play Music All Access will be called in the future.

Google has already acquired the YouTubeMusicKey.com domain, and has an YouTube Music Key app ready for Android devices – Android Police offers plenty of screenshots, such as the ones above, for the upcoming YouTube music streaming service.

The company has apparently added “over 20 million high-quality tracks – complete albums, organized into artist discographies” to Music Key, and subscribers will also get access to concert footage, covers and remixes. Chromecast support is also included in the Android application.

While the app appears to be ready for launch, it’s not clear at this time when the service is supposed to released, or whether Google is done negotiating with content owners before the service can officially launched.