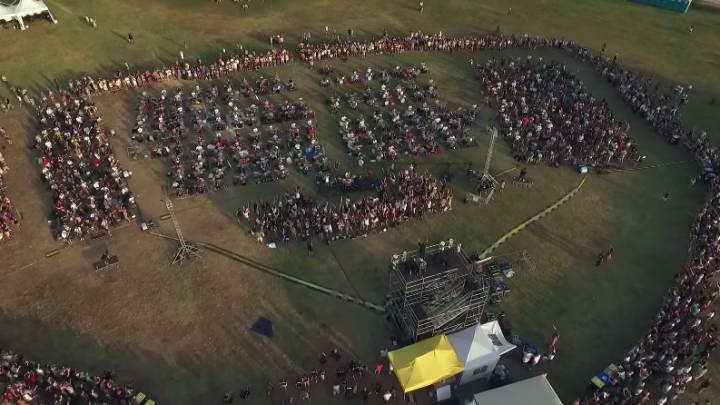 It might not work every time, but a new video shows you one way to convince your favorite band or artist — in this case, the Foo Fighters — to come and perform in your town, even if it’s a small community. How did they do it? 1,000 musicians banded together and performed a Foo Fighters song with the hope of convincing Dave Grohl and his bandmates to come play a show in Cesena, Italy.

Located in northern Italy, the city has about 100,000 people, and plenty of them seem to be Foo Fighters fans. The Rockin’ 1000 initiative is a “never tried before” event, with musicians coming from all over Italy to try to convince the popular band to include the city in its future tour plans.

“On July 26, 2015, 1,000 rockers played at the same time and in the same place Learn to Fly” the ambitious project’s site reads. “We will shortly publish the video of the performance and the call to the Foo Fighters to ask them to come and play in Cesena – Italy.”

The video was posted on YouTube on Thursday, and it went viral quite fast — the clip got over 4 million hits in about a day.

And now for the happy ending: this seemingly impossible mission actually did convince the Foo Fighters to add Cesena to their tour. The band said on Twitter in Italian “see you soon, Cesena,” attaching the clip to the message (as you can see above).