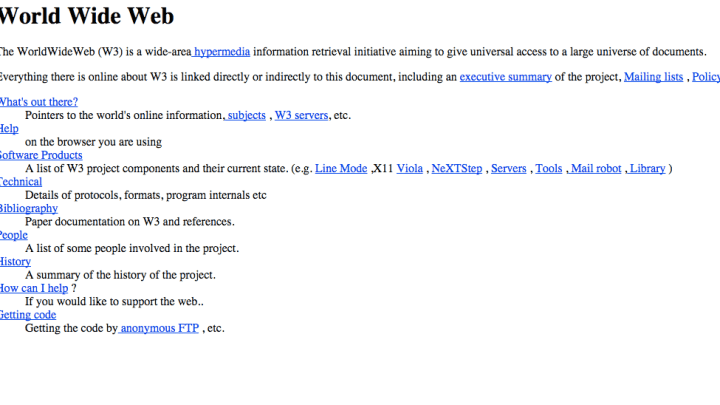 One of the biggest inventions of our time was made at a mind-numbingly boring Swiss headquarters of European Organization of Nuclear Research. 25 years ago, Tim Berners Lee’s idea about “a wide-area hypermedia information retrieval initiative aiming to give universal access to a large universe of documents” led to the birth of the very first web page. It is spectacularly ugly and mind-blowingly meaningful and stated curtly that “everything there is online about W3 is linked directly or indirectly to this document.” The World Wide Web was born.

This ugly little collection of fewer than two dozen links is the granddaddy of everything that now consumes our lives: Twitter, Facebook, Google, BuzzFeed, etc. That ultimate government-sponsored conflagration of taxpayer money across the European Union, CERN, ended up spawning the phenomenon that created a plethora of companies worth hundreds of millions of dollars. The first American web page was created in the first week of December, 1991 at Stanford. It is truly zen as it only includes two links and no announcements about its purpose or scope.

There are now more than 860 million registered domain names in the world. The number of individual web pages is hard to gauge. Nobody talks about World Wide Web anymore — the very concept is vanishing, because the web is now so ubiquitous it is becoming invisible.

Interestingly, the explosive growth of mobile apps over the past half a decade came as a complete surprise — back in 2007 even Steve Jobs was deeply skeptical about downloadable apps. Now they consume 2 hours of the day of an average American smartphone user. The web page is no longer quite as dominant as it was half a decade ago but it still is something most of us stare at least 8 hours a day.