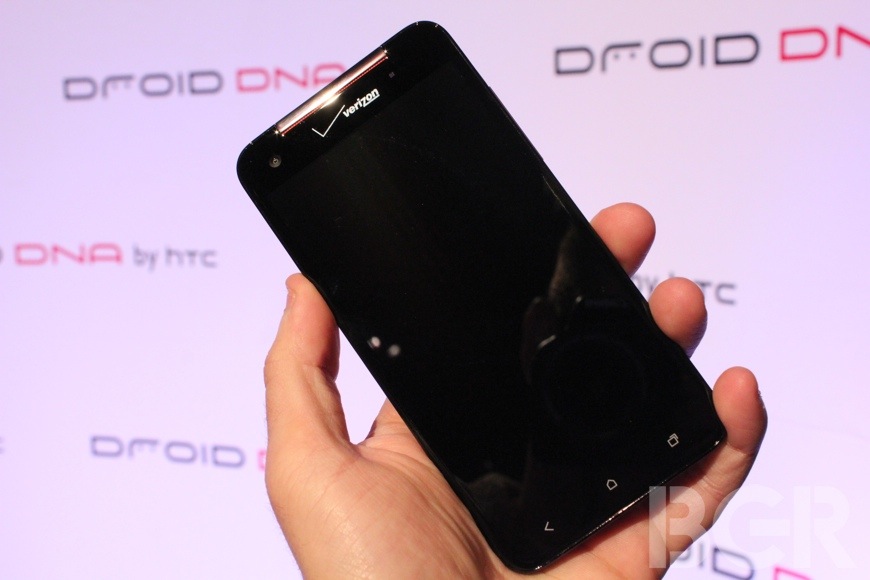 Verizon (VZ) and HTC (2498) have done something special with the DROID DNA. Following the joint press event in New York City on Tuesday, we were able to get some hands-on time with one of the latest and most powerful Android smartphones. The handset, which BGR exclusively revealed this past April, screams high-end from every angle, it is light weight, it feels great in hand and has some of the best specs of any smartphone to date. Read on to find out more.

As HTC said, “this isn’t a phablet.” The DROID DNA is the same size as the 4.7-inch HTC One X, however it includes an absolutely stunning 5-inch Super LCD 3 full HD display, that translates to a pixel resolution of 1920 x 1080. As a whole, you can think of the DROID DNA as an improved One X. The smartphone includes an 8-megapixel rear camera with an f/2.0 aperture that took better than expected images even in low light. The shutter is fast and responsive and HTC’s camera software is a vast improvement over the stock Android experience. Android users have been patiently waiting for a phone with an iPhone 5 quality camera and this could be it.

Calling the device fast is an understatement, the DROID DNA had little to no lag and launched apps without a hitch — an impressive feat for a smartphone on a showroom floor — thanks to the 1.5GHz quad-core Snapdragon S4 Pro processor and 2GB of RAM. On the software side, the device runs HTC’s Sense 4+ user interface atop Android 4.1, and while it isn’t the newest version of Android, it is nice to see phones being released with Jelly Bean.

It would seem the latest trend of the mobile industry is the transition to wireless charging, a feature HTC has included with the DROID DNA. The handset also includes an NFC chip, LTE connectivity, 16GB of internal storage and HDMI out through MHL. Perhaps the only drawback is the battery, the DROID DNA includes a non-removable 2020 mAh battery. Representatives on site, however, spoke of 10 or more hours of battery life with moderate usage.

HTC has called the DROID DNA the ultimate DROID, but this may very well be one of the best smartphones of all time, period. Be sure to check BGR’s review of the device in the coming weeks.