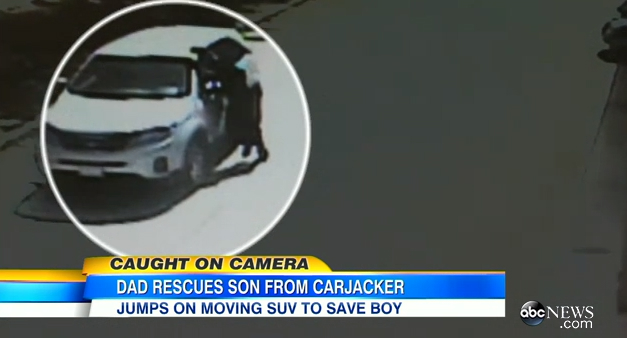 A man in Georgia on Sunday jumped on a moving SUV to save his 8-year-old son, after a teenager raced off with the car while the boy was still in the back seat.

DON’T MISS: TWC is About to be Sued for Violating Net Neutrality Rules and Holding Traffic for Ransom

Malcom Millones stopped for gas and while he was getting ready to pump, a teen got into the SUV and drove away with the car. Millones fiancée was inside the store to pay, and his son Rashaan remained inside the vehicle.

Millones quickly reacted, jumping on the side of the SUV, and he hung on for a quarter-mile before falling and breaking his arm. His actions were enough to distract the carjacker, giving Rashaan the chance to escape.

“I would say it’s cool and brave for my dad to jump on a car and get his arm broken for me,” Rashaan told ABC News. “I was shrieking, I hate to admit it, but… I’ve never been scared before until now. I never really felt fear until now, honestly,” Millones said.

Meanwhile, the stolen SUV is yet to be found.

A video showing the brave stunt follows below.