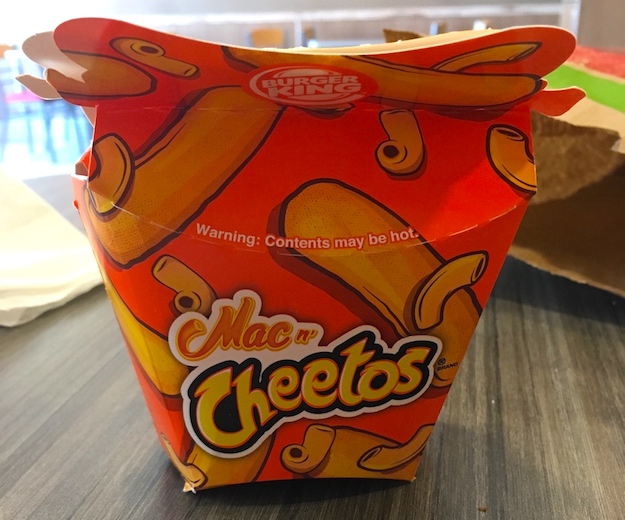 America: Land of the free, home of Mac n’ Cheetos.

In case you’ve been living under a rock or too busy eating kale in a back corner of Whole Foods somewhere, you might have missed an incredible new food innovation from Burger King. Not to worry, we’ll get you up to speed lest you risk embarrassing yourself at any upcoming fourth of July barbecues.

Earlier today, BK chains around the country began selling a wild new concoction known simply as Mac n’ Cheetos. The new food item is exactly as it sounds — gooey pieces of mac and cheese nestled right inside of deep-fried Cheetos. Yep, you no longer have to live in Wisconsin in order to enjoy what can easily be categorized as a heart attack in a bucket.

So earlier today, I braved the sweltering 91 degree heat and embarked upon a search for the ultimate junk food mashup. A few minutes later as I approached my destination, I saw BK signage off in the distance. It was like seeing a mirage, akin to a weary and thirsty traveller seeing visions of water while trekking through the desert.

Could it be true? Doth my eyes deceive me?

But no! This was not a mirage. I had reached my destination and this particular Burger King was one of the select BK locations that sold the Mac n’ Cheetos I had been searching for. Now don’t worry, those feelings of envy pulsing through your veins are completely understandable.

Here’s what happened next.

I walk in and the place is completely empty. Yup, nothing out of the ordinary just yet.

I saunter on over to the counter and put my order in, pinching myself just to make sure I wasn’t in the midst of a beautiful dream. The lady at the checkout counter asks me if I want to make it a meal.

I politely decline. I need this to be a pure and unadulterated experience. More so, I need to ensure that this moment isn’t influenced (or tainted!) by tasty fries or a refreshing coke. If I wanted to truly appreciate this junk food lover’s dream, I needed to go in fresh.

The order is in, and the waiting game begins.

Before I know it, I see a lady from behind the counter grab a big bag of frozen Cheetos and dump a few into a deep fryer.

I immediately get second thoughts. What on earth have I signed up for? Sure, we’ve all dreamt of macaroni and cheese filled Cheetos [Ed note: Have we?], but now that the opportunity was before me I was getting nervous.

Time begins to pass. Two minutes. Three minutes. Four minutes in, and my order still isn’t ready. Did I order wrong? Should I have opted for a more reasonable food option, say the grilled hot dog or the chicken fries?

Next thing I know, I see an employee at the grill quizzically checking her phone as she fiddles with a knob. Is she looking up the cooking instructions? Is she texting? Hopefully it’s the latter.

One minute later and my precious Cheetos are being scooped out of the frier and put into a bag. Finally! And because this is America, they ask me if I’d like any dipping sauces to go along with it. I opt for ranch and honey mustard, a decision I would come to regret for reasons we’ll soon get to.

I sit down and begin to dig in, surrounded by a sea of orange.

I take a few bites and am pleasantly surprised. They’re actually quite good! Truth be told, there’s not really much of a Cheetos flavor with this product. More than anything, it tastes like a standard mozzarella stick filled with mac and cheese instead of mozzarella. And for less than $3 for a box of 5 Cheetos, it’s not a bad deal at all.

On the inside, it’s definitely cheesy, though not as much cheese as the advertisements would otherwise suggest.

Next, I try the dipping sauces. The ranch is okay. It’s not bad, but it’s nothing special. All in all, it complemented the Cheetos reasonably well. The honey mustard though was, in hindsight, a poor choice. You know the phrase, the whole is greater than the sum of its parts? Well this was the opposite of that. Mixing the Cheetos with the honey mustard made the sauce itself taste a bit off while completely making the Cheeto wholly unappetizing.

Lesson learned. Next time I’ll have to bring my own sauce.

Overall, I’d have to give Burger King’s latest cross promotion creation a ranking of 13 stars out of a possible 15 stars. The food was fresh and tasty, but not having an adequate dipping sauce detracted from the overall experience.

Nonetheless, game recognizes game and this junk food concoction is no frills and exactly what you’d expect and want: it’s greasy, cheesy, and delicious.

As a final point, and at the risk of sounding controversial, I think it’s fair to say that Mac n’ Cheetos is exactly the type of food America needs at this point in its history. In a time where politics divides us all, what better way to bring the country together than with a ridiculous food invention that could have only been conceived and released here in the good ole’ U S of A? So whether you’re more likely to be holding a gun or a protest sign, now is the time for you to drop whatever happens to be in your hand and instead pickup a Mac n’ Cheeto stick and toast to the good life.