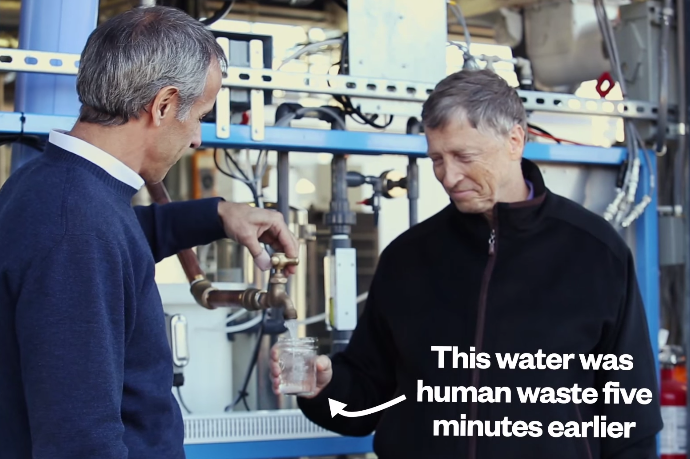 Bill Gates may not run Microsoft anymore but he’s still doing some insanely cool things, such as coming up with more ways to provide clean drinking water to people around the world who now lack access to it. Gates’ quest for clean water has now led him to try getting it from a most unexpected source: Human waste.

MORE REASONS TO LOVE BILL GATES: Bill Gates gives a lucky person one of the best Secret Santa gifts ever

Gates recently took a trip to Janicki Bioenergy, the company behind the  Janicki Omniprocessor. For the uninitiated, the Omniprocessor creates clean water from sewer sludge first by boiling the sludge to separate the water vapor from the actual waste. The remaining solid waste is then tossed into a fire and burned, which is easier to do since the solid waste is now dry.

The waste then creates steam that’s used to generate electricity to power the Omniprocessor, which at this point runs the water vapor through a cleaning system and then spits it back out as pure drinking water. Gates himself tried a glass of water that was processed from human sewage and it seems to smell and taste perfectly fine despite its unappealing origins.

Watch the full video — complete with Gates drinking the purified waste water — below.