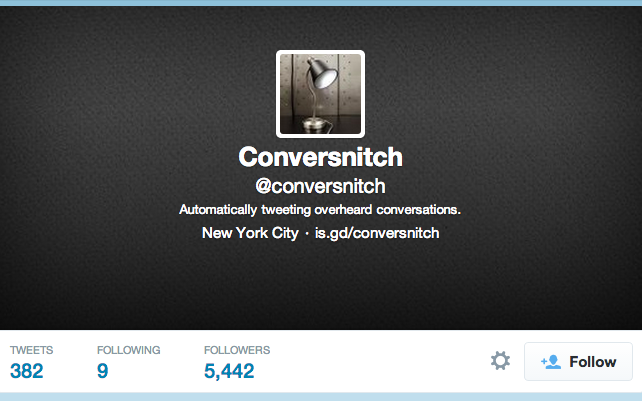 Ever wanted to spend a day as a fly on the wall in a public place and just listen in to what people are talking about as they passed you by? Well now you have a Twitter account you can follow that’s doing it for you. @Conversnitch is an account that has been set up to listen in on and then tweet out bits of conversations of people who are walking through a particular area in New York City. The Guardian informs us that the account has been set up by two artists who used “only a credit card-sized Raspberry Pi computer, a microphone and a Wi-Fi card hacked into a lightbulb fitting, and a piece of open source software hosted at Github” to create a snooping device that is virtually undetectable.

While the ethics of this are certainly questionable, this project is at least audio only and doesn’t have any way of identifying who is speaking in the tweets. It also makes for absolutely fascinating reading as many of the conversation snippets are between friends who often intimately confide in one another because they don’t think they’re being listened to. The result is a sort of cubistic stream of fragmented conversations that seem like they’d belong in a James Joyce or Virginia Woolf novel. Among the highlights:

The account sadly hasn’t sent out any new messages since May 5th so it seems that either the experiment is over or it’s been discovered and removed.

You can still check out every recorded conversation snippet it recorded by clicking here.