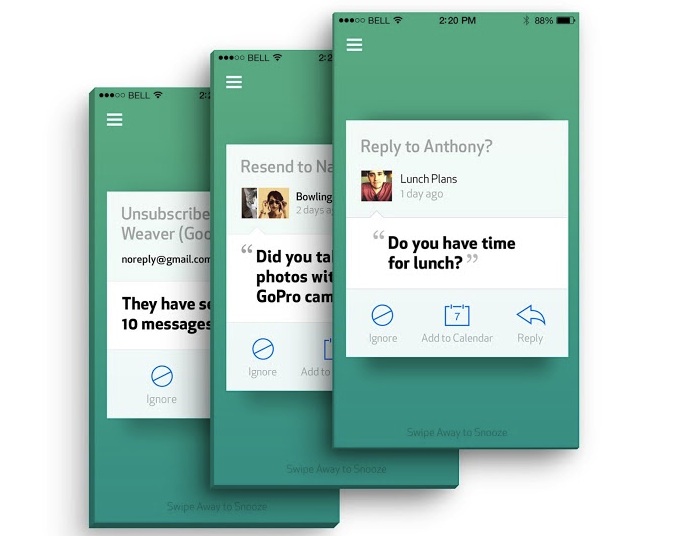 Do you have friends that send you long-winded emails that take forever to get to the one point that you actually want to respond to? Don’t worry: New iOS app Seer will scan the email for you and give you only the relevant bits. Seer, which is available to download for free from the Apple App Store, bills itself as a personal assistant app whose sole job is to help you manage the voluminous amount of email you get every day.

Among other things, Seer says it can “remind you to answer urgent emails, follow up on sent messages, and can suggest emails to unsubscribe from” if you constantly get messages from a particular source that you delete without ever opening.

Seer is able to do this by monitoring your behavior on email and making recommendations based on your usage patterns. So if there’s someone whom you respond to on a regular basis, Seer can highlight that message as important to make sure it doesn’t get lost in the shuffle. Similarly, you can have Seer “mute” certain people in your group of friends who routinely send out emails that you rarely respond to. It can also scan messages to find out exactly what you need to know from them, such as a question about what time you’re supposed to meet up with someone.

Seer says that it developed its artificial intelligence system from technology originally developed by the CIA, which means it definitely has a somewhat freaky vibe to it that could be off-putting if you don’t like the idea of third-party mobile apps scanning your emails.

For now, Seer only works with Gmail but the team behind it is working to make it work with Exchange, AOL, Yahoo and other email systems going forward. The app is only available on iOS for now but Seer hopes to make an Android version of it in the future.