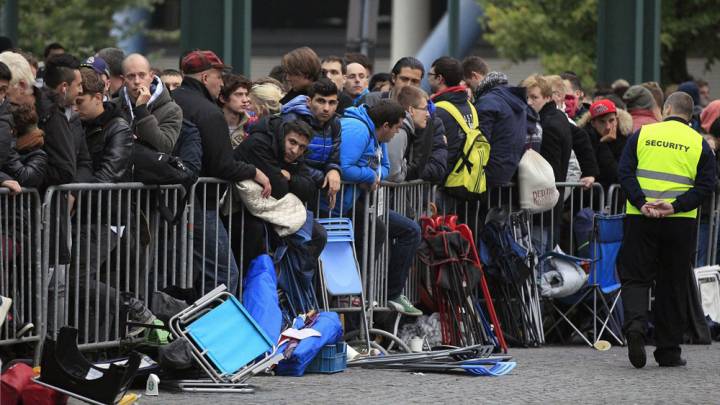 Let’s get this out of the way: There is simply no sane reason to spend days sleeping outside the Apple Store just so you can be among the first people to get the new iPhone. This is especially true because you have the opportunity to both preorder the new device online or to buy it at a number of other retail locations that won’t be as crowded. Nonetheless, while I’m not an iPhone user and I would never sleep outside a store for any smartphone, I really admire iPhone fans’ passion despite the fact that I also think they’re ridiculous.

The reason that I find these diehard iPhone fans both insane and lovable is that they remind me of two other iconic American subcultures that have an almost frightening devotion to something they love. I’m referring, of course, to Deadheads and Trekkies.

Growing up as a fairly nerdy kid myself, I definitely absorbed aspects of both cultures even though I was never fully a part of either of them. And when I went to college, I largely hovered between two different groups of friends — one that was largely straight-edge and would spend Fridays watching Buffy reruns and another that got high and went to go see jam bands.

Hanging out with both Trekkies and Deadheads, I came to realize that the Deadheads were just as nerdy as the Trekkies in their own right, even though they had a reputation for being “cooler” just because they did a lot more drugs.

Why were Deadheads so nerdy, you ask? Largely because, in the late ’90s before the iPod and Youtube existed, they traded bootleg tapes and CDs of their Dead favorite shows. And the way they prized these tapes was akin to the way your nerdiest friends prize their mint-condition comic books or their Magic Cards. My Deadhead friends used to drive me completely crazy listing off song-for-song a Winterland setlist from ’74 for no other reason than they just liked to hear the names of the songs.

Where am I going with all this? Well just as Trekkies are famous for dressing up in ridiculous costumes and talking to each other in Klingon while attending Star Trek conventions and just as Deadheads were famous for standing outside venues where the Dead were playing while holding signs that say, “I NEED A MIRACLE,” so are iPhone fans now so devoted to what they enjoy that they’ve built up an entire subculture around just standing in line for their favorite smartphone.

Companies such as Samsung understandably love to ridicule this kind of devotion — but in reality, they would absolutely kill to have fans that are this engaged and this loyal. In fact, the only smartphone fans who rival the intensity of iPhone fans are BlackBerry diehards, though sadly there aren’t nearly enough of them anymore to be a significant force in the mobile world.

But mostly I like iPhone fans’ dedication because in this age of constant cynicism and snark, it’s easy to forget that it’s perfectly fine to really like something and be passionate about it. Again, although I’m not an iPhone user myself, I understand that new iPhones make a lot of people very happy when they come out, much like getting tapes of three killer Dead shows from ’77 makes some people happy and much like dressing up like a Romulan makes other people happy.

And while I don’t happen to share any of those three passions, I not the type of person to hate on those who do.