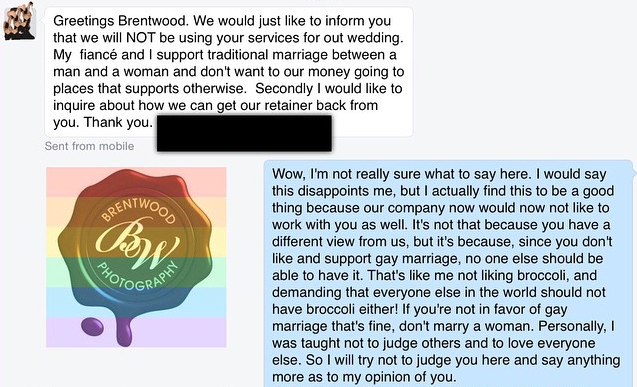 The U.S. Supreme Court’s major ruling on Friday was celebrated all over the Internet and around the country, as gay couples everywhere were finally told they have the right to get married. However, many others who oppose same-sex marriage showed their anger, including one couple that wasn’t shy in making their feelings known.

The couple decided to fire their liberal wedding photographer, as they didn’t like his open views on same-sex marriage that he posted on Facebook. However, the photo studio was quick to issue an appropriate response.. and it was soon picked up by the media.

“Greetings Brentwood,” the bride wrote. “We would like to inform you that we will NOT be using your services for out wedding. My fiancé and I support traditional marriage between a man and a woman and don’t want to our money going to places that supports otherwise. Secondly, I would like to inquire about how we can get our retainer back from you. Thank you.”

Clinton Lee, who owns Brentwood Photography, was quick to respond, posting this particular exchange on the company’s Instagram feed.

“Wow, I’m not really sure what to say here,” Lee began his response. “I would say this disappoints me, but I actually find this to be a good thing because our company now would now not like to work with you as well. It’s not that because you have a different view from us, but it’s because, since you don’t like and support gay marriage, no one else should be able to have it. That’s like me not liking broccoli, and demanding that everyone else in the world should not have broccoli either!”

“If you’re not in favor of gay marriage, that’s fine, don’t marry a woman. Personally, I was taught not to judge others and to love everyone else. So I will try not to judge you here and say anything more as to my opinion of you,” Lee added.

As for the retainer, Lee explained that the contract the couple signed explicitly states there are no retainer refunds. However, he added that “because of this conversation, I have decided to donate your $1,500 to GLAD, a group created to help and support gay rights.”

The full conversation can be seen in the image below.

The business reply heard 'round the world! Lol I hope in the scheme of life this isn't the one thing I am known for but I am happy I took a stand. The only thing I wish I had changed on this photo screen shot is where it says I support "Gay Marriage". While I 100% do, I wish I had just said that I support marriage opportunity for all. We shouldn't have to call it "gay marriage" like it is something different. It's just marriage. Like it is between a man or a woman or a black person and a white person. Ever person on this planet deserves their own happy ever after, even if it is different from your view of it. Don't like "gay marriage" that's cool, don't get "gay married"! But don't try to stop a company who believes everyone deserves to be happy. PLEASE NOTE: Yes I realize I could have handled this differently or more professionally, but I have always been known to be an artist with freely expressed feelings and my uniqueness. I will never stop being me. I will continue to love everyone. #loveislove #love #marriage #lgbt #glad #lovewins #standup #pride #istandwithyou #kcco www.BrentwoodPhotography.com

A photo posted by Brentwood Photography (@brentwoodphotography) on Jun 28, 2015 at 1:22am PDT