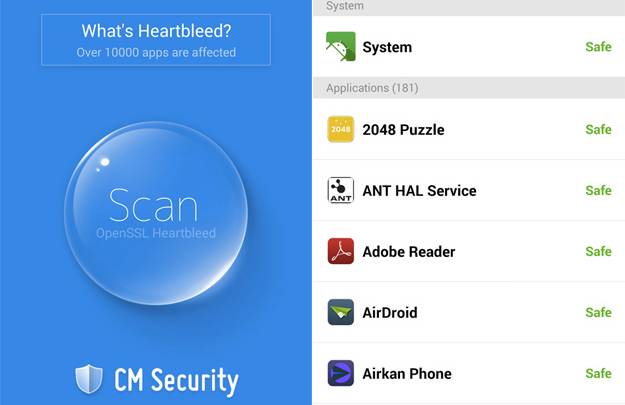 After all this time, is Heartbleed really still an issue we should be concerned with? Yes, yes it is. Heartbleed, the shockingly severe and widespread OpenSSL flaw that impacted 66% of the entire Internet at the time of its discovery, has already been addressed by thousands upon thousands of websites. But believe it or not, there are still countless websites — and apps — out there that have yet to apply the updates necessary to protect their users.

With vulnerable Android apps having been downloaded a whopping 150 million times, Heartbleed is a particularly important issue for Android users. And now, a simple new app claims that it will protect Android phone and tablet owners for free.

Released last week and updated on Monday, CM Security Heartbleed Scanner by app developer KS Mobile will scan your Android device for apps that are still vulnerable to Heartbleed. Continued usage of apps and websites that remain vulnerable can lead to the theft of your login credentials and other sensitive personal data.

This developer is also the team behind popular anti-virus Android app CM Security, which has been downloaded more than 10 million times and has a 4.7 star rating in the Google Play store with nearly 2.5 million reviews.

CM Security Heartbleed Scanner is completely free and can be downloaded by following the link below in our source section.

For more on how to protect yourself from Heartbleed and other security flaws, see our post on how to tell if any of your accounts have been hacked.