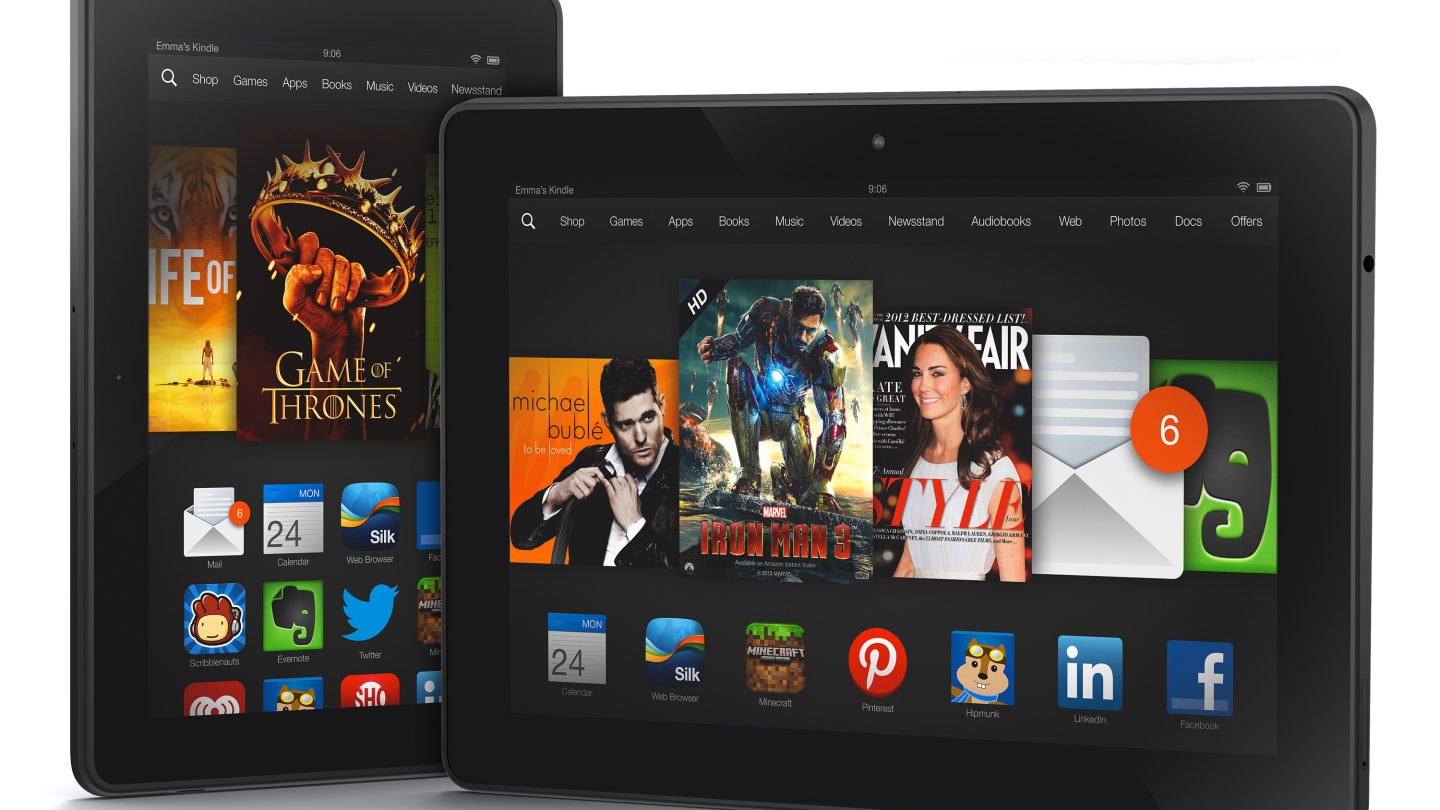 As for the new $139 Kindle Fire HD, Amazon says it features a 7-inch display with a resolution of 1280×800 pixels, or 216 pixels per inch, a dual-core 1.5GHz processor, and Fire OS 3.0 “Mojito,” the forked version of Android that Amazon uses as the platform for its tablets. The new Kindle Fire HD will start shipping on October 7th. The device is much the same as the Kindle Fire HD that Amazon announced last fall but with $60 lopped off its price tag.

Press releases for the new devices, which both are available for preorder today, follow below.

“It’s been just two years since we introduced the first Kindle Fire, and the team is innovating at an unbelievable speed,” said Jeff Bezos, Amazon.com Founder and CEO. “2.2 GHz processor, 339 ppi display, new 34% lighter design, Fire OS 3.0, and new exclusive features like the Mayday button, X-Ray for Music, Second Screen, and Prime Instant Video downloads. We’ve worked hard to pack this much hardware, innovation, and customer obsession into these prices.”

Amazon’s exclusive HDX display brings together exceptional pixel density (1920×1200 at 323 ppi for 7”, 2560×1600 at 339 ppi for 8.9”) and perfect color accuracy (100% sRGB), resulting in images and videos that display as the photographer or videographer intended. The new display also features dynamic image contrast, a unique algorithm that adjusts the color of each pixel depending on the ambient brightness in order to maximize contrast. This makes images and videos even easier to see in any lighting conditions, including outdoors. See a video: www.amazon.com/display.

Kindle Fire HDX tablets are the first tablets powered by the most advanced quad-core Snapdragon 800 processor. These are the only tablets with a processor over 2 GHz—the four cores can each run at 2.2GHz, providing 28 billion instructions per second—over 3x the processing power of the previous generation Kindle Fire HD. Fire HDX also doubles the RAM to 2GB, resulting in faster app launch times, faster website load times, smoother multi-tasking, and better overall performance.

Amazon integrated the capacitive touch layer directly into the glass display on Fire HDX, leaving a lighter single layer instead of the typical 2-layer display stack. The Kindle Fire HDX 8.9” frame is a single-piece of machined magnesium with a blend of glass and nylon molded onto the unibody to create openings for the antennas and maximize signal strength without sacrificing sturdiness. The result is the lightest large-screen tablet—at just 13.2 ounces, it is 34% lighter than the previous generation large-screen Fire HD tablet.

11 Hours of Battery, Up to 17 Hours for Reading

Even with all this additional power, Fire HDX still delivers 11 hours of mixed use battery life. When you are reading, Fire HDX automatically powers down the CPU and any unnecessary system components and stores the displayed text in dedicated, low-power memory—the result is up to 17 hours of battery life for reading.

Both the 7” and 8.9” Kindle Fire HDX feature a front-facing HD camera to help you stay in touch with friends and family with Skype. Fire HDX 8.9” features an 8 megapixel rear-facing camera that allows for high-resolution photos and 1080p HD video, plus an LED flash, Electronic Image Stabilization, and a wide-aperture 5P f2.2 lens that lets in more light, reducing exposure times and producing sharper images. See a video:www.amazon.com/fire-camera.

New origami-style cover design provides a simple stand for both portrait and landscape positions, and attaches magnetically so it’s easy to take on and off. The cover for the 8.9” Fire HDX features a custom slide feature that quickly exposes the rear-facing camera and automatically launches the camera application so you won’t miss a great photo opportunity. See a video: www.amazon.com/quickpic.

Having trouble or want to learn how to use a new feature? Simply tap the Mayday button in Quick Settings, and an Amazon expert will appear on your Fire HDX and can co-pilot you through any feature by drawing on your screen, walking you through how to do something yourself, or doing it for you—whatever works best. 15 seconds or less is the Mayday response time goal. Mayday is available 24×7, 365 days a year, and it’s free. See the separate press release on the Mayday button and preview three upcoming TV ads that show how the Mayday button works:www.amazon.com/mayday.

Prime Instant Video is the only U.S. online subscription streaming service that enables offline viewing—on a plane, on vacation, and anywhere else where you may not have Wi-Fi. Tens of thousands of Prime Instant Videos are now available for download on Fire HDX. If you are new to Prime, you get one free month of when you purchase Fire HDX.

Amazon is expanding X-Ray to music by adding lyrics that let you follow along with songs. Lyrics display and scroll automatically line-by-line as the song plays. See a screenshot: www.amazon.com/x-ray.

X-Ray for Movies and TV—Now Even Better

Customer-favorite X-Ray for Movies and TV now shows the names of songs as they play as well as a list of all music in the movie or TV show, and lets you jump to the scene in which a particular song is playing. X-Ray also shows trivia items in context with the action on the screen. For example, in The Godfather when Clemenza tells his henchman to “leave the gun, take the cannoli”, X-Ray alerts you that actor Richard Castellano ad-libbed that famous line of dialog. X-Ray for TV also provides character backstories so you can easily remind yourself of the character’s history. X-Ray is offered only by Amazon and is powered by IMDb.

Second Screen Lets Others Join In

Fling TV shows and movies from your tablet to your big-screen TV using Second Screen, which turns your TV into the primary screen and frees up your Fire HDX to provide playback controls, a customized display for X-Ray, or simply a place to email, browse the web, and more while you watch a movie. Second Screen will be available starting next month for PlayStation 3 and Samsung TVs, and later this year for PlayStation 4. You can also wirelessly mirror movies, TV shows and photos from your tablets to your big-screen TV with Miracast-enabled accessories or TVs.

With the new email on Fire HDX, it is easier than ever to set up your accounts, group conversations by subject, sync your email and more. Reading and managing documents on Fire HDX is simple: email them, sync them from a computer with Cloud Drive, clip them from the web with Send to Kindle, or transfer them via USB. Coming mid-November as part of the free, over-the-air Fire OS 3.1 update—print documents, photos, emails, and calendar events directly from Kindle Fire to compatible wireless printers.

Fire HDX is ready for work, with support for encryption of the user partition of the device to secure data; support for Kerberos authentication so corporate users can browse secure intranet websites; the ability to connect to secure enterprise Wi-Fi networks as well as corporate networks via a native or a 3rd party VPN client; and Mobile Device Management solutions ranging from Amazon’s Whispercast service to 3rd party vendors like AirWatch, Citrix, Fiberlink, Good Technology, and SOTI. Some of these features will be delivered as part of the Fire OS 3.1 update. See the separate press release on enterprise features: www.amazon.com/kindle-enterprise.

Organize your books, newspapers, magazines, and apps in customized collections for easy reference, and Amazon’s Whispersync technology synchronizes the collections across your Kindle devices and reading apps so they’re available on all of your devices. Cloud Collections will be available as part of the Fire OS 3.1 update.

Join over 20 million other readers and see what your friends are reading, share highlights, and rate the books you read with Goodreads on Kindle, available exclusively from Amazon. Goodreads will be available as part of the Fire OS 3.1 update. See screenshots: www.amazon.com/goodreads.

Kindle Fire’s Special Offers are better than ever with exclusive limited-time, limited-quantity deals available directly from the lock screen. These deals are similar to Lightning Deals that run on Amazon.com, but with even greater savings. The first deal, available in the coming weeks, will be the Madden NFL 25 video game for $5 (92% off). See screenshots: www.amazon.com/offers.

“Buy Once, Enjoy Everywhere” with the Best Cross-Platform Interoperability

With apps available on the largest number of devices and platforms, Amazon makes it easier than ever to access your content anytime, anywhere. Use the Kindle, Amazon Instant Video, Amazon MP3 and Amazon Appstore for Android apps to “Buy Once, Enjoy Everywhere.” No other company offers the same level of flexibility with your content.

The new Origami covers feature an innovative design that allows you to stand Fire HD in both portrait and landscape.