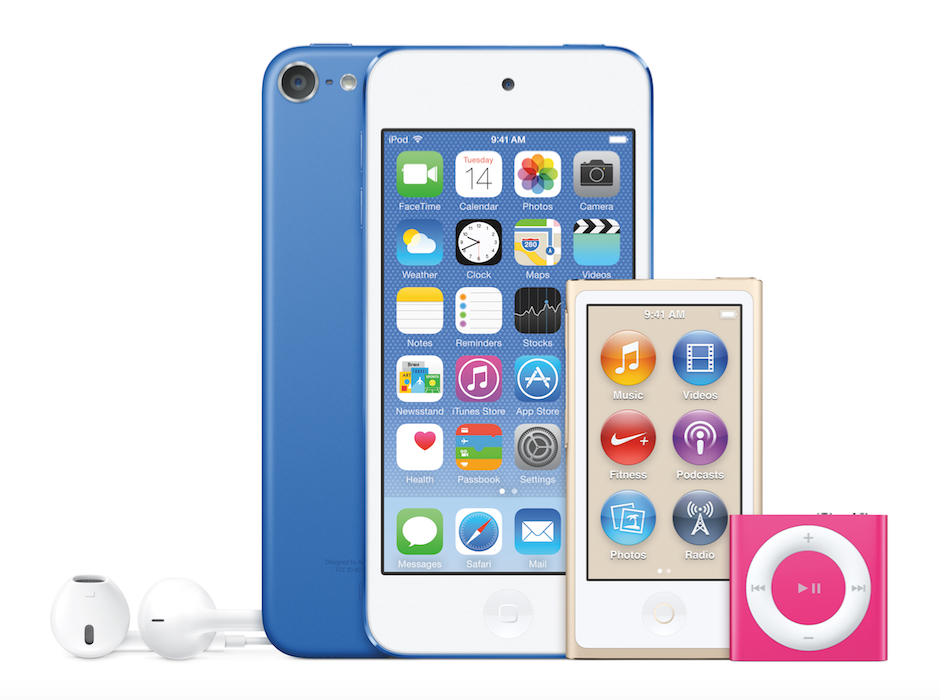 iPods might not be as exciting as they used to be, especially following the iPhone revolution that changed the mobile landscape, turning every smartphone into a music player. But Apple isn’t quite done selling them, especially now that it launched its own music streaming service.

In fact, starting today, there are new iPods available to buyers, as Apple just announced its 2015 iPod refresh.

Just as previous rumors and leaks suggested, Apple scheduled an iPod refresh for today, with the iPod touch getting the most important new features.

The new iPod shuffle and nano will come in new colors including darker blue, pink and gold. But that’s about all you can expect from them.

Meanwhile, the iPod touch received the same new paint job, but also some welcomed new additions including a major camera bump (8 megapixels instead of 5 megapixels), a 64-bit A8 processor, an M8 co-chip for fitness tracking and up to 128GB of storage.

CUPERTINO, California — July 15, 2015 — Apple® today introduced the best iPod touch® yet and unveiled a new lineup of colors for all iPod® models, including space gray, silver, gold, pink and blue. The ultra-portable iPod touch features a new 8 megapixel iSight® camera for beautiful photos, an improved FaceTime® HD camera for even better selfies, the Apple-designed A8 chip with 10 times faster graphics performance for a more immersive gaming experience, and even better fitness tracking with the M8 motion coprocessor. With the newly launched Apple Music™ service, members can enjoy playlists curated by the most talented music experts from around the world, stay in-the-know on music culture with a global 24/7 broadcast on Beats 1℠ radio, and comment on or like backstage photos and videos shared directly by their favorite artists on Connect.

“iPod touch gives customers around the world access to Apple Music, the App Store and iOS, the world’s most advanced mobile operating system, starting at just $199,” said Greg Joswiak, Apple’s vice president of iPhone, iPod and iOS Product Marketing. “With big advancements like the A8 chip and the 8 megapixel iSight camera, customers can experience next-level gameplay, take even more beautiful photos and enjoy their favorite music, TV shows and movies.”

With the A8 chip, the same used in the revolutionary iPhone® 6, users can play even more immersive games for hours at a time, all the while with great battery life. iPod touch has become one of the world’s most loved mobile gaming experiences — its 4-inch Retina® display and rich collection of gaming titles are further enhanced with incredible graphics performance and thousands of Metal-optimized games. With the advanced iSight and FaceTime HD cameras, iPod touch owners, for the first time, can have fun with popular features including slo-mo and burst mode, while capturing memories and everyday moments with gorgeous photos and videos. Three times faster Wi-Fi lets customers stay in touch with friends and family through FaceTime calls, and download movies and TV shows with ease.

The App Store℠ on iPod touch, available in 155 countries, gives users access to 1.5 million apps across 24 categories. iPod touch is also the perfect way to carry your music collection in your pocket. iTunes® boasts the world’s largest music catalog, and with Apple Music, customers have access to the revolutionary streaming music service, Beats 1, Apple’s first ever live radio station, and Connect, where artists can communicate directly to fans. Apple Music is available on iPod touch through the Music app — users are invited to a 3-month trial, after which a $9.99/month membership fee will apply. There is a family plan providing service for up to six family members available for just $14.99/month.

iPod touch comes with iOS 8 and a collection of powerful built-in apps. Send unlimited voice and video text messages through iMessage® over Wi-Fi, quickly make edits to your photos with the Photos app and keep track of your fitness and wellness with the Health app. With Family Sharing, up to six family members can share purchases from iTunes, iBooks® and the App Store, along with photos and calendars. Parents can also create Apple IDs for children which includes Ask to Buy where parental permission is required for all purchases.

Pricing & Availability
The new iPod touch starts at $199 (US) for the 16GB model, $249 (US) for 32GB and $299 (US) for 64GB, and the entire iPod family in its five new colors is available starting today through the Apple Online Store (www.apple.com), Apple’s retail stores and select Apple Authorized Resellers. For the first time, iPod touch is available in a 128GB model for $399 (US) through Apple Retail Stores and the Apple Online Store, along with the (PRODUCT)RED lineup. iPod touch requires a Wi-Fi connection or a Mac® or PC; USB 2.0 port; Mac OS® X v10.7.5 or later; Windows 7, Windows 8 or later; and iTunes 12.2 or later. An Apple ID is required for some iPod touch features.