Thrill-seekers be warned: If you’re looking for an adrenaline rush, jumping off the top of a cell phone tower might give you that pulse-quickening buzz you’re lusting after, but it’ll probably be cut short. A 20-year-old Wisconsin man experienced that unfortunate disappointment last week after attempting an illegal BASE jump from a Charter Communications tower, only to be snagged by a guy wire.

The man scaled the tower to a height of 300 feet before jumping off. He was apparently unable to avoid the wires below, however, and found himself hanging helplessly 50 feet off the ground.

BASE jumpers seek out tall structures or geographical features from which to jump, throwing a parachute or using a wingsuit to slow their descent once they are clear of nearby obstacles. In fact, the “A” in BASE stands for “antenna,” since the tall structures are a favorite among jumpers looking for things to climb.

It’s incredibly dangerous and depending on where the jump is taking place, it’s often illegal. This particular stunt was indeed in violation of the law, and the man was ultimately arrested for criminal trespass after being treated at a local hospital. 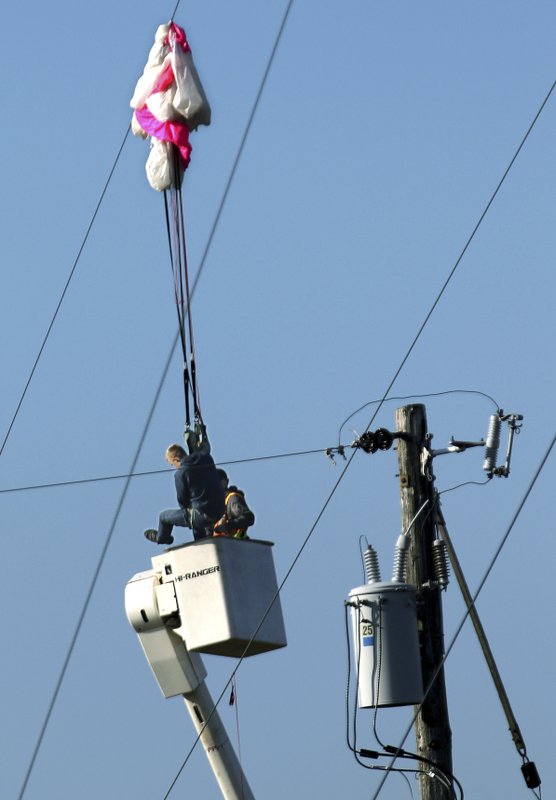 Hilariously, the man was actually forced to call the police himself after becoming snagged. The jumper, no doubt a bit red in the face after an emergency crew had to pluck him from the air with a boom lift, was rescued at around 9:30 a.m. after spending an unspecified amount of time dangling in the wind.

The cable that snagged the man doesn’t carry power, or anything at all, really. Guy wires are high-tension cables that are used to provide structural support. The cable was one of many attached to the cell tower, and in images from the scene, it’s clear that the man flew right into them. Bummer.

Tweet
Here’s how to catch the Orionid meteor shower tonight