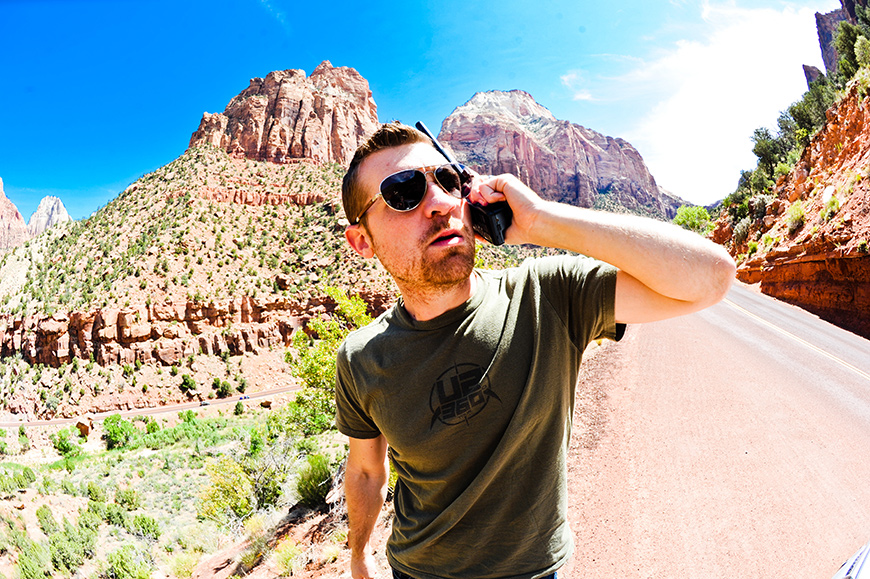 A Google employee peers down at an Android Wear smartwatch demo, and notices that — based on real-time traffic information — it would take him 55 minutes to get to work. “Commute’s not looking too bad!,” he exclaims, before swiping to the next card on the demo.

How severely damaged must our society’s state of mind be to make such a comment?

I’ve long been a proponent of flexible working scenarios. I haven’t had a de facto office outside of my own home for a decade, and I’ve been able to squeeze more life out of life than I ever imagined. I’ve also managed to secure a Guinness World Record in my profession, just in case you had any inkling that I used my remote position as a way to… you know, slack off.

As a matter of background, the aforementioned quote came during today’s Google I/O keynote. Now, I understand that an hour-long drive on the 101 is pretty typical for Google employees — particularly the ones that choose to live in San Francisco and drive down to Mountain View each day.

Back in 2010, a gentleman by the name of Jason Fried produced a 15 minute TED talk that I believe every working member of this planet should watch. It’s titled “Why work doesn’t happen at work,” and given that I spent four years of my life in an office (followed by 10 outside of one), I can attest that everything he says is spot-on. In a nutshell, offices typically produce the exact opposite of what you should want in a work environment.

For instance, what I seek on a daily basis are things like: peace, focus, hyper-efficiency, and long stretches of uninterrupted time where I can achieve massive gains that simply aren’t possible in 15 to 20 minute windows of time. Offices disrupt, or outright demolish, all of those things.

I’d also be inclined to ask the gentleman who believes an hour-long commute “isn’t bad” what his definition of “bad” would be. When your best case scenario is a two-hour roundtrip to work for five of the seven days you’re given in a week, how do you even muster the will to wake up in a positive mood?

For those who prefer to look at things quantitatively, chew on this: a two-hour roundtrip commute means that 1/12th of your day is consumed by driving or riding to and from the same place each day. Worse, that’s 1/6th of your waking hours.

If you’re commuting an hour each way to work, you’re being robbed of 1/6th of each day. Just outright thievery.

If you estimate that an hour of your day is worth whatever your employer pays you, start to add up how much cash you’re exhausting just getting to and from a place of work. A place of work, mind you, that holds increasingly little value in a world of near-universal connectedness. (Manufacturing positions notwithstanding, of course.)

If you’re an employer, just imagine how much more work your collective force could accomplish if they spent the 10 hours they’re committing to you each day (8 “at work,” and 2 “getting to and from there”) doing stuff that matters. Or, better still, imagine how morale would change if you announced that folks could put in just 8 hours per day instead of the 10 that they’re currently spending. Outlandish, right?

In fact, you don’t really have to imagine at all. Just talk to people who’ve been blessed enough to find an employer that understands how beneficial a remote working situation really is to both the worker and the employer. It takes a uniquely dedicated and focused employee to make the most of a remote situation, but frankly, those are the kinds of people employers should be aiming for.

It’s both wild and depressing that a two-hour roundtrip commute is viewed as “not bad” by a Google employee. Remember, this is the company that invented Google Voice, Hangouts, Gmail, and real-time collaborative tools for an entire document suite, all to improve efficiency and connect people who are in two different places.

In closing, I recognize that there’s a time and place for facetime. But that time is not “every single day” and that “place” isn’t a random piece of real estate in whatever city you happen to live in. I travel well over 130,000 miles per year to get things done in a face-to-face manner, but so much can be achieved from anywhere.

Hopefully, we’ll gravitate to a place where we’re one day appalled by the idea of a two-hour commute. Or, we’ll mature enough as a society to admit how appalled we already are.