Galaxy S5, HTC One (M8) and other leading smartphones square off in new comparison 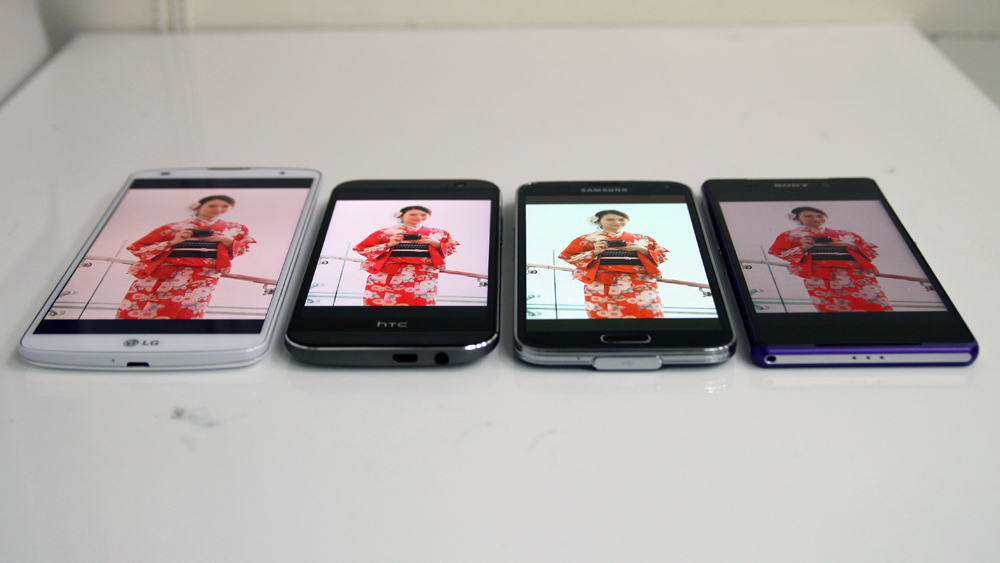 Samsung’s new flagship Galaxy S5 doesn’t officially launch until the second week of April, but people in South Korea can already purchase the hotly anticipated new smartphone thanks to some anxious carriers looking to beat a sales ban. As such, gadget blog ePrice has already managed to get its hands on the sleek new phone and on Thursday, it posted a big comparison pitting the handset against other leading devices from Samsung’s rivals.

In a battle that focuses on display quality, Samsung’s new Galaxy S5 was lined up with the brand new HTC One (M8) — which we covered earlier this week in a can’t-miss review — as well as the LG G Pro 2 and Sony’s Xperia Z2.

The 5.9-inch LG phablet is obviously the largest of the four phones, and its full HD display features the lowest pixel density at 373 pixels per inch. Samsung’s new Galaxy S5 has the smallest footprint overall, making it the most manageable smartphone of the group, but the display spreads its 1,080 x 1,920 pixels across 5.1 inches (432 ppi) while the HTC One (M8) is slightly larger but features a 5-inch screen at 441 ppi.

A few more comparison photos follow below and the rest of the set can be seen on ePrice’s website.