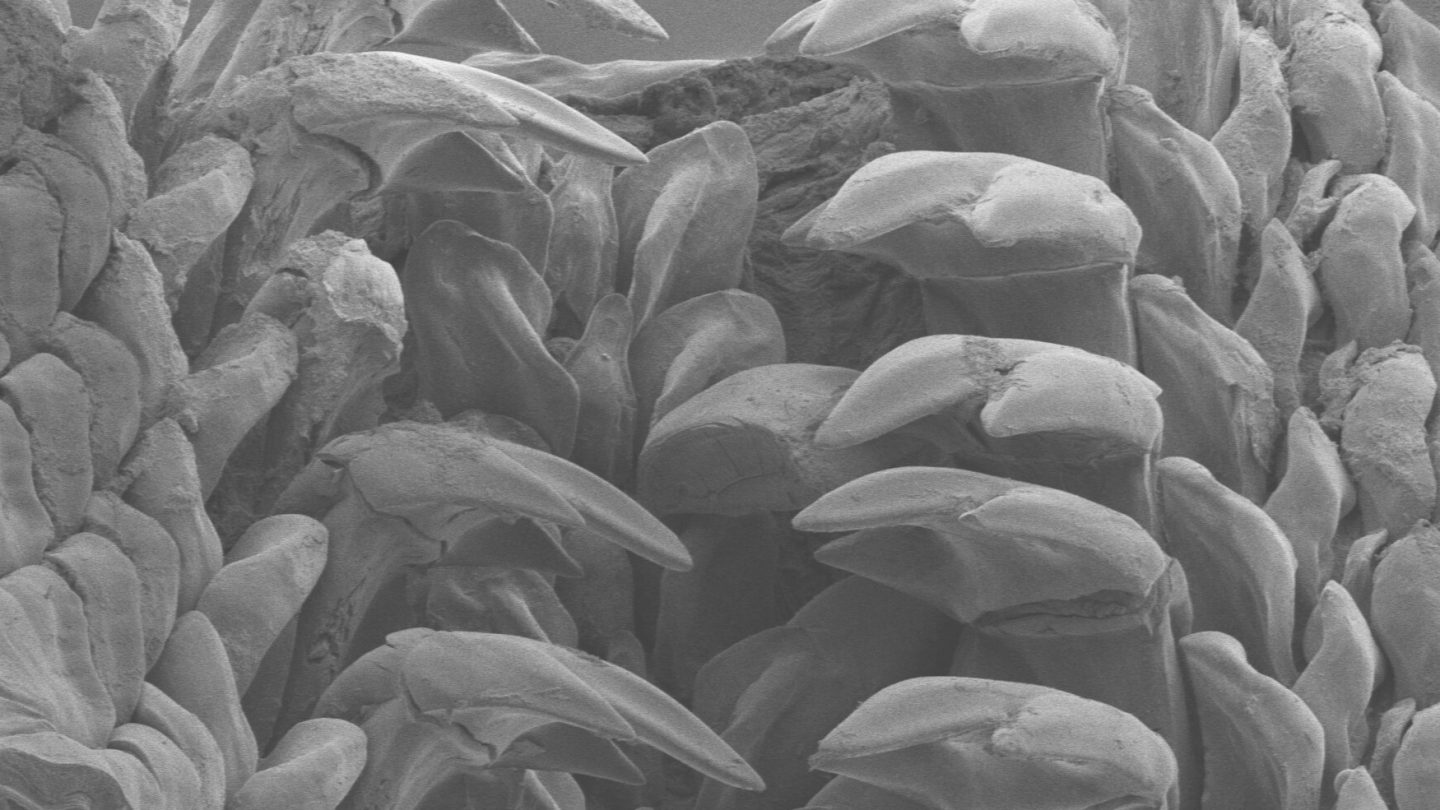 If you’ve never heard of the mollusk Cryptochiton stelleri, it’s totally understandable. I actually hadn’t heard of it before either, but a new study published in the journal Proceedings of the National Academy of Sciences has made the strange creature one of my new favorites. The marine animal is a type of chiton, which are mollusks that are oval-shaped and covered with armor-like shell plates. They cruise around on the seafloor, slowly making their way from one food source to the next.

Cryptochiton stelleri is special for a few reasons. For one, it looks like a giant blob of meat, earning it the nickname “wandering meatloaf.” But the even more interesting thing is that its teeth are ridiculously hard. Now, scientists studying the teeth recently discovered that the animal’s teeth contain a type of mineral that, previous to this new finding, had only been identified in rocks. The fact that this type of chiton has the mineral in its teeth was entirely unexpected, but also very exciting.

As the researchers explain in their new paper, they used electron microscopes and other instruments to examine the structure and contents of the chiton’s teeth. They already knew the teeth were very, very tough. Chitons eat a lot of algae that forms on rocks on the sea bed. When they come across an algae-covered rock, they scrape their teeth across it, munching on the algae that break free, and the teeth are no worse for wear. When they found that the teeth contained the mineral santabarbaraite, they were surprised.

“This mineral has only been observed in geological specimens in very tiny amounts and has never before been seen in a biological context,” Derk Joester, senior author of the study, said in a statement. “It has high water content, which makes it strong with low density. We think this might toughen the teeth without adding a lot of weight.”

But understanding what the teeth are made of is only half the mystery. The other half is learning how the teeth are attached to the soft tissue underneath. The team examined the hollow structure between the teeth and the chiton’s head. Called a “stylus,” this long tube-like feature is described by the researchers as “a tough material composed of extremely small nanoparticles in a fibrous matrix made of biomacromolecules, similar to bones in our body.” That’s a fancy way of saying that the stylus is a bony structure that secures the teeth firmly but is also attached strongly to the underlying tissue of the head.

“We’ve been fascinated by the chiton for a long time,” Joester explains. “Mechanical structures are only as good as their weakest link, so it’s interesting to learn how the chiton solves the engineering problem of how to connect its ultrahard tooth to a soft underlying structure. This remains a significant challenge in modern manufacturing, so we look to organisms like the chiton to understand how this is done in nature, which has had a couple hundred million years of lead time to develop.”