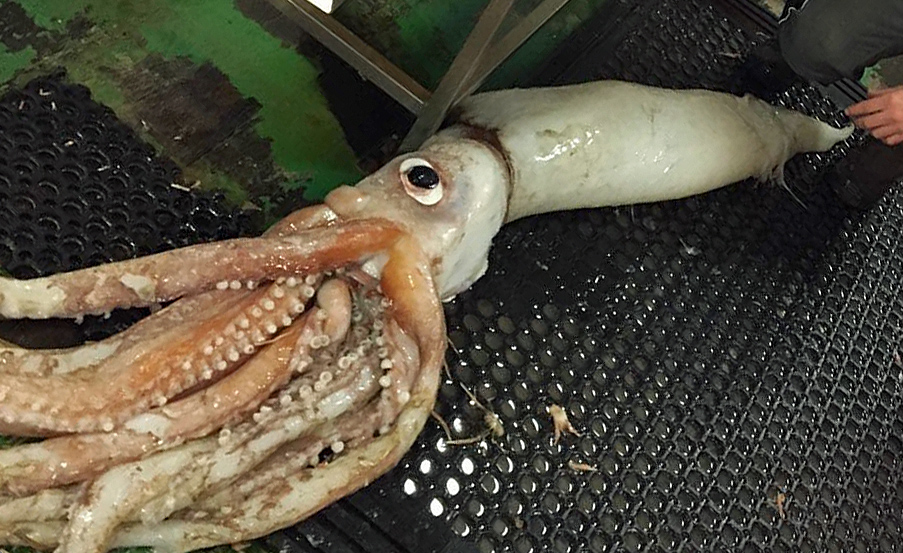 You probably won’t find many people who envy the daily grind of professional fishermen who spend their day trawling the depths. It’s a messy, oftentimes dangerous job that offers no guarantees, and for every man who makes his fortune from a fishing net there seems to be just as many who come up empty handed. All that being said, if you choose to dedicate your life to taming the ocean, every once in a while you’ll get to see a real life sea monster, like the one caught by the crew of the Cú na Mara off the coast of Ireland this week.

Once thought to be nothing more than the hallucinations and rum-soaked daydreams of men who had spent a few too many days at sea, researchers have known that giant squid actually exist for some time now, but actually specimens are still quite rare. This newly-caught monster measures an impressive 18 feet from the top of its body to the bottom of its longest tentacle, and would be an extremely intimidating sight in its natural habitat.

Another Giant Squid landed in Dingle. Only 7th recorded in Ireland in 350 years. Amazingly 4 have been caught by Flannery family! @rtenews pic.twitter.com/1gWBYZr045

This squid is only the seventh recorded specimen to be found in the area in the past 350 years, which gives you a pretty good idea of how rare they are, but what’s even more amazing is that four of those creatures (including this one) were caught by the same fisherman family. Prior to this week, their most recent giant squid catch came just two months ago.

While a squid of this size could most certainly do some serious damage to all manner of aquatic prey, it’s actually quite small for a giant squid. Researchers have examples of the species that pass the 40-foot mark, while unverified claims of squid passing 65 feet in length have popped up from time to time.