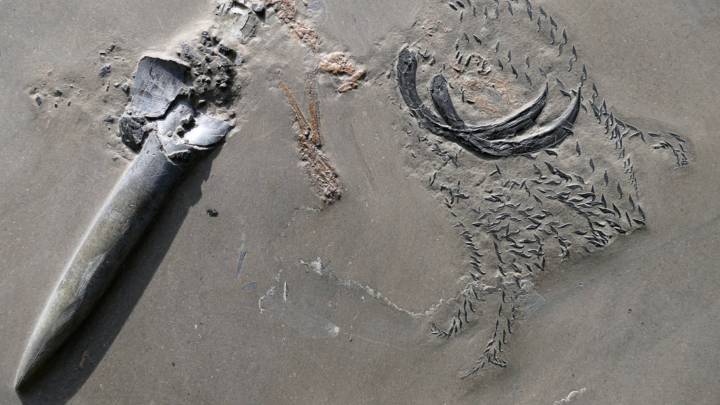 Finding fossils of creatures that lived 180 million years ago isn’t easy. The vast majority of the fossilized remains that are found from millions of years ago are of animals doing their own thing on their own. On rare occasions, fossils of animals interacting have been found. These are often animals of the same species or sometimes two different species in a predator-prey relationship. Those are quite rare but extremely exciting and valuable to researchers. So, you can imagine the excitement of the team of scientists that found fossilized evidence of an interaction between not two, but three different species.

The fossils were found in Germany by what is described as an “amateur collector” who just happened to stumble across an absolutely incredible discovery. The fossils are that of an ancient crustacean and a squid, with a special cameo by a hungry shark. The fossils are the subject of a new paper published in the Swiss Journal of Palaeontology.

It’s a ridiculously fortunate scenario for the researchers, as the fossils provide information about the creatures themselves but also about their behaviors and predatory relationships. Based on what the researchers could gather from the fossils, they believe the scenario played out as follows:

The squid likely snatched up the crustacean — a member of the Proeryon family, which looked a bit like a lobster or crab but had “long, thin claws” — and was in the midst of cracking it open to feast when it was attacked by another predator. The scientists think that the predator that surprised the squid may have been a species of ancient shark, though they can’t say for certain. However, whatever it was, it was powerful enough to bit the squid and cause enough damage to fatally wound it. The squid, possibly still alive but gravely injured, drifted to the bottom of the sea and died with the crustacean (or at least its rigid outer skin) still in its mouth.

The odds of such a scenario unfolding in the ancient ocean may not have been super rare. Predators often like to ambush prey while they least expect it, including while they are hunting for food. However, the fact that the squid and crustacean tumbled to the seabed and ended up being fossilized in the sediment while still attached is quite remarkable. The fact that the shark didn’t finish its meal is also fortunate. If it had torn the squid apart and made a meal of it, this unique combination fossil simply wouldn’t exist at all.

There is a lot we can learn about ancient creatures based on the behavior of their modern relatives. That being said, it’s always nice to have proof, and these fossils serve as a time capsule that allows scientists to look into the distant past.