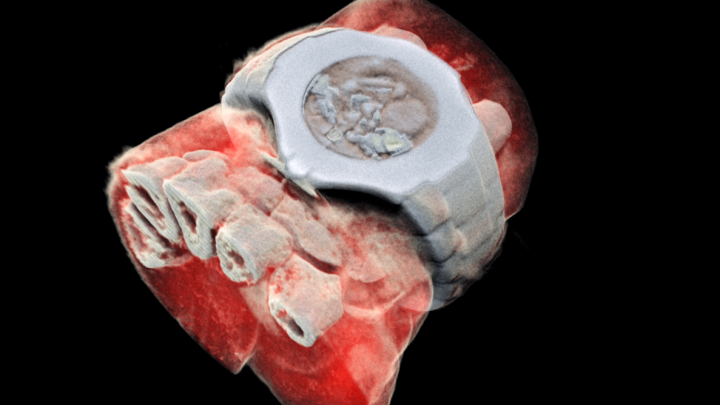 For all the advancements in body-scanning medical technology, X-rays still tend to be pretty boring to look at. They’re more accurate than ever, providing plenty of detail, but they’re just so… boring, right?  A company called MARS Bioimaging hopes to change that with X-rays that are not only fully 3D, like a CT scan, but also full-color. The’ve built what they call the MARS large bore spectral scanner, and one glimpse at the images it can produce will convince you of how awesomely powerful it is.

The system, which was developed by father-son team Phil and Anthony Butler, has been in development for roughly a decade, but that long, long road appears to be paying off in a big way. The machine is capable of creating stunningly accurate 3D models of whatever it sets eyes on, allowing doctors to explore the insides of a patient’s body without picking up a scalpel.

I mean, just look at these scans:

The MARS scanner uses technology that was originally developed by CERN. The “Medipix” chips used in the new X-ray system are pixel detectors that provide rapid imaging while also relaying color information, allowing the MARS machine to build the 3D model of the target object (in this case, the human body) and color it at the same time. The result is the kind of scans you see above.

It’s an incredibly powerful tool, and its use cases are pretty obvious. If a doctor can examine the bones and organs of a patient in full-color 3D they can more accurately plan for operations or perhaps even avoid surgery in some cases. Patients may benefit in the form of quicker recovery times from more efficient operations, and more accurate care plans based on exactly what is going on inside their bodies.

However, as promising as this all looks, it’s not quite ready for its time in the spotlight. The company is still working towards full commercial rollout of the system, so it might be a little while before you see one in your local clinic.