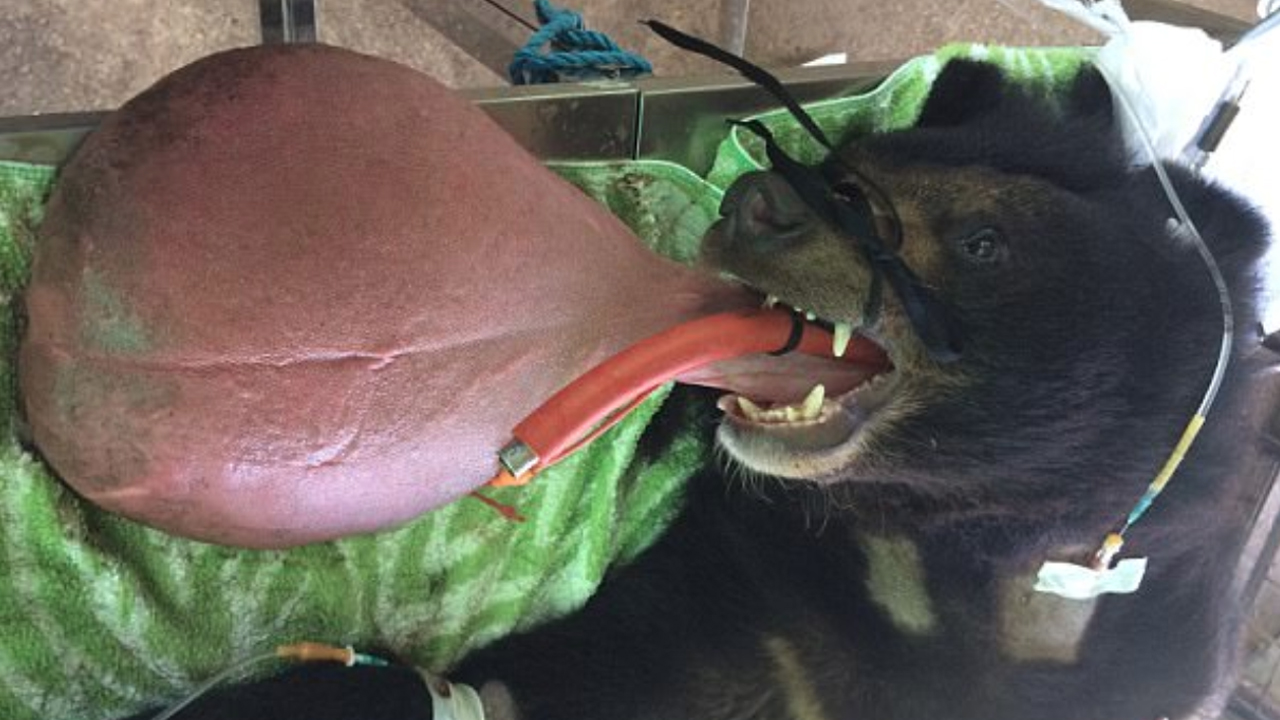 If you’ve ever bit down at the wrong moment or drank some scalding hot cocoa or soup, there’s a good chance you know what a swollen, sensitive tongue feels like. Now imagine your tongue has swollen to the point that you can’t even keep it in your mouth, and it hangs so low it drags on the ground when you walk. That was the sad life of Nyan htoo, a bear that lived among the monks of a monastery in Myanmar, but not anymore.

Nyan htoo, whose name roughly translates to “bright,” had lived at the monastery since being rescued as a young cub, and lived a fairly modest life. A couple of years ago, his days of playing with his brother and munching on food were interrupted by a swollen tongue. After a few months of no improvement and the swelling getting worse, a vet was brought in to attempt surgery and remove the extra tissue. That’s when things took a turn for the surreal.

Rather than the surgery being the end of the bear’s rough patch, it seemed to only make things worse. The swelling not only returned, but became even more severe than before, eventually making the tongue so large that the poor animal had to drag it along the ground and lean against walls to support the strain on its added burden.

Eventually, a second surgery was planned and veterinary surgeon Heather Bacon of the University of Edinburgh teamed up with veterinary nurse Caroline Nelson from the Animal Asia Bear Rescue Centre in Vietnam to give Nyan htoo some relief. The operation successfully amputated the vast majority of the bear’s tongue over the course of four hours, and this time the swelling stayed away.

After dropping the nearly seven pounds of tongue tissue, Nyan htoo’s life improved dramatically, and has since returned to a life of leisure at the monastery. Meanwhile, doctors remain stumped as to what caused it. The prevailing theory is that a mosquito-borne strain of elephantiasis was responsible for the infection and swelling, but as the condition has never been documented in bears it would be a world first.