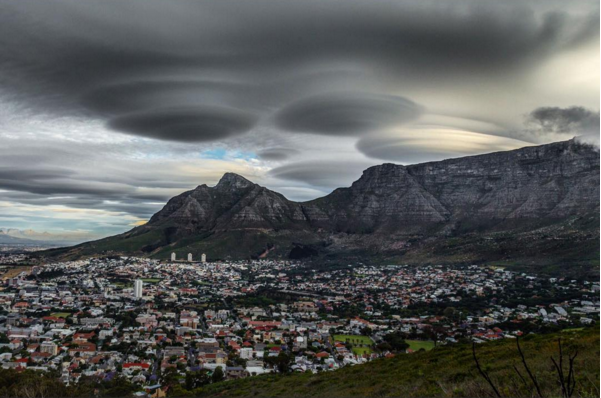 There were a couple of supposed UFO sightings over the weekend and they weren’t part of a promotion for the new X-Files series. First there was the reported UFO that was seen over Los Angeles that turned out to be a test missile fired by the Navy. The other one involved very creepy-looking UFO-shaped clouds that appeared over South Africa, as you can see in the photo at the top of the page. Does this mean that the plot of District 9 is coming to life? Absolutely not — thanks to National Geographic, we know there’s a rational scientific explanation for this phenomenon.

RELATED: UFOlogists are freaking out over this NASA pic of a supposed Martian woman

Clouds like these are called lenticular clouds, which NASA informs us form “in air that passes over a mountain, rises up again, and cools past the dew point — so what molecular water carried in the air condenses into droplets.” Given that the clouds pictured in South Africa are appearing over mountains, we can safely assume they are actually lenticular clouds and not UFOs.

At any rate, these “UFO clouds” look particularly circular, which is likely why they’ve gone viral on the web so quickly. But remember, they are just clouds, no matter how often UFOlogists tell you that “the truth is out there.”