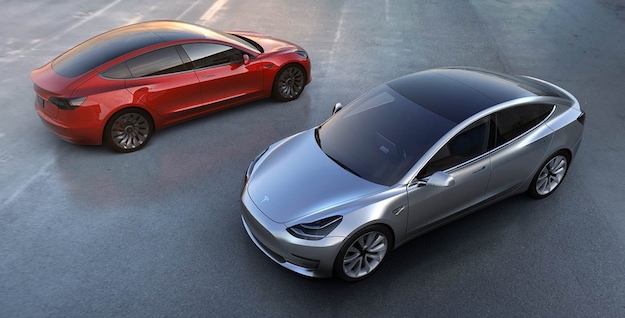 With more than 325,000 reservations to date, it’s overwhelmingly clear that the Tesla Model 3 has what it takes to become a mainstream success, provided of course that Tesla can actually get its manufacturing capabilities to keep pace with demand. While prospective buyers have overwhelmingly indicated that they approve of the Model 3’s design and feature-set, Tesla’s highly anticipated EV isn’t entirely flawless. At least not yet.

As we highlighted previously, the lack of an instrument cluster on the dashboard has some potential buyers worried. One can only hope that a HUD option will be available by the time the car is released in late 2017. Another commonly levied concern about the Tesla Model 3 is that the car’s trunk design leaves a whole a lot to be desired.

In fact, Jalopnik went so far as to call the the trunk the Model 3’s “biggest design fail.”

“Look at that vertical, awkward opening,” Jalopnik writes.”It’s the compromised trunk opening of a car that’s designed to have a hatchback, but for some random reason, couldn’t. It’s a sad compromise trunk at best.”

Indeed, complaints about the Model 3’s trunk have even been raised by folks who put down $1,000 to reserve the Model 3. For instance, some have noted that if the top of the trunk has snow or water on it, opening it up would cause much of it to leak into the trunk compartment itself. And that’s not to even mention that the storage volume of the trunk itself appears to be unusually small.

You can get a much better appreciation for the strange Model 3 trunk design via the video below, beginning at about the 3 minute and 30 second mark.

Not to worry, Tesla appears to be well aware that the trunk implementation above leaves a lot to be desired. During one of Elon Musk’s characteristic tweetstorms, the Tesla CEO said that the company is working to enlarge the opening of the trunk.

As to why the company opted for a trunk as opposed to a hatchback design, Musk also relayed via Twitter that this was a purposeful design choice intended to allow for greater headroom in the backseat.

@CmaxVs Only way to get enough rear passenger headroom was to move the rear roof cross-car support beam. A bike will still fit no problem.

And lastly, the illustration below depicts some of the design considerations Tesla had to take into account when designing the Model 3.