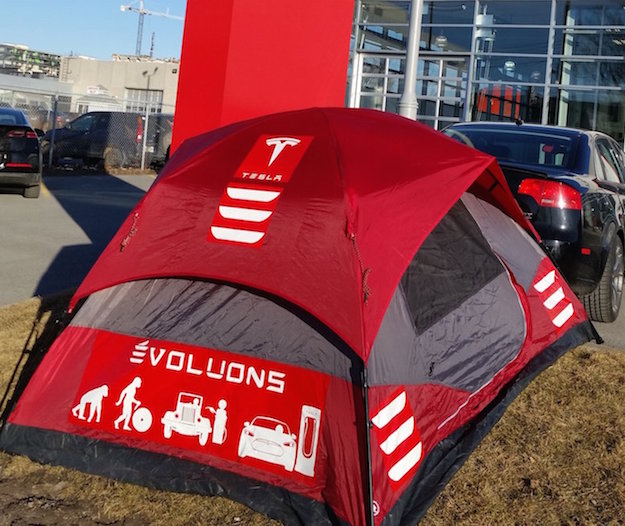 Pre-orders for the Tesla Model 3 are slated to open up tomorrow, exclusively in Tesla stores. As a result, we’ve already seen a number of reports of prospective Model 3 buyers lining up outside of Tesla dealerships and camping out in tents, all in an effort to get their order in ASAP.

While we’ve always known that Tesla has a strong and passionate fanbase, who would have guessed that the company has fans as dedicated (or perhaps crazy is more apt, depending on your perspective) as Apple fans who, year after year, queue up outside of Apple retail stores in order to get their hands on a new iPhone on launch day.

While lining up for a new iPhone never appealed or made much sense to me, the lines associated with the Model 3 actually do. Not only is demand for the Model 3 expected to be immense, but Tesla has historically struggled to get new cars out to customers in a timely manner. Even Tesla CEO Elon Musk casually joked yesterday that the company might need to increase production after pointing to a CNBC poll where 76% of respondents indicated that they’d be willing to put down $1,000 in order to reserve a Tesla Model 3.

In other words, for car buyers who have literally been waiting years for Tesla’s mass market EV to hit the streets, lining up a day ahead of time isn’t that wild of an idea.

One guy in Australia even managed to secure the first spot in line yesterday.

Meanwhile, lines are beginning to take shape at other Tesla locations around the globe. An Imgur page spotted via Reddit has already started to compile a running list of such photos.