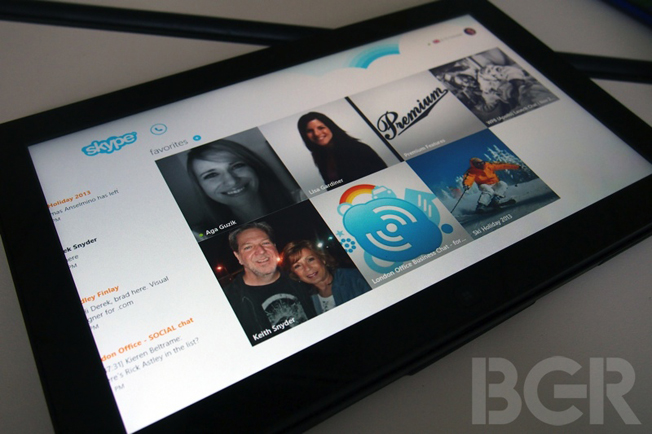 Microsoft (MSFT) shocked everyone when it announced it was buying Skype for $8.5 billion last year. Slowly but surely, we were expecting Skype to replace Microsoft’s own Live Messenger client as the default messenger and to be slapped it into every Windows Phone device and Xbox 360. While Microsoft’s stance is that Skype will remain in development for multiple platforms, it’s slowly becoming the company’s communication backbone. A Microsoft representative told BGR that about 80% of all instant messages sent over Skype are now sent over the company’s Messenger backend.

With Windows 8, the Skype team went back to the drawing board to redesign the messenger client for touchscreen elements and the live tiles interface. Let’s start with the Windows 8 version of Skype.

As with many of Microsoft’s apps, Skype is now completely redesigned to fit the Metro/Modern UI design language. Its interface is minimal without overloading you with information and the app is always on in the background, even when it is closed, just like on a smartphone. Microsoft claims the app should drain very little battery from tablets and Ultrabooks while it’s running.

The new Skype for Windows 8 isn’t a self-contained app; it’s designed to be directly integrated into Windows 8’s core. For instance, Windows 8 has a People app that keeps track of all of your contacts. Within it, you can instantly Skype message, video call or voice call a contact. It’s a small enhancement, but it makes Skype seamless throughout the OS.

Like a smartphone, Skype places all of your chats up front and center. As soon as you launch the app, you’ll find a section for recent chats where you can follow up on any missed messages at a quick glance. Scrolling the app to the right, there’s a section for favorites and of course friends and buddies in the People hub. Smart touches like a semantic zoom that calls up an alphabetical list of contacts and a swipe down from the top to quickly hop between open chats only make Skype more pleasant to use.

What really makes Skype shine is video chat and multitasking support with Windows 8’s snapped view feature. In the normal desktop version of Skype, when you video chat in full-screen, instant messages are hidden in the background. With the new Skype app, IMs pop up in friendly circular bubbles that can be clicked on for quick-response actions. A good example is if a friend who you’re video chatting with sends a link to, say, BGR.com. You can click that link and it’ll automatically open the website in a side-by-side window to the right of the screen, pushing the video chat to the left half. What you’re getting is multitasking without loss in function.

And to sweeten the Skype deal, the chat client now lets you sign in with your Microsoft account and link them together.

The new Skype will be available for download in the Windows Store on October 26th.