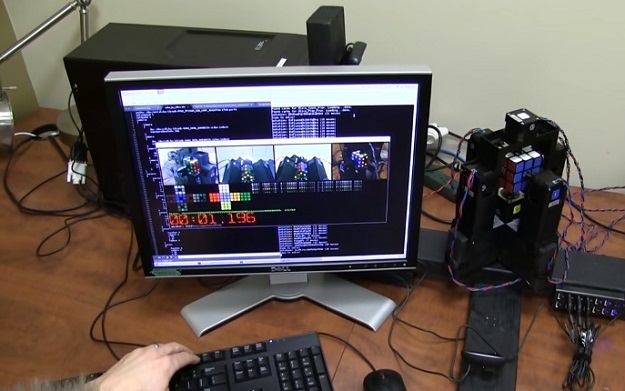 In today’s modern world, where cars can park themselves and be summoned with the press of a button, it perhaps shouldn’t come as much of a surprise that there’s a robot capable of solving a Rubik’s Cube in just about one second flat (1.019 seconds to be exact). While that may seem too fast to be true at first glance, keep in mind that the world record for a human solving a Rubik’s Cube is less than 5 seconds.

DON’T MISS: 8 paid iPhone apps on sale for free for a limited time

Put together by a pair of hobbiysts — Jay Flatland and Paul Rose — the robotic contraption below consists of four USB webcams which determine the current state of the cube and then pass that information along to a computer algorithm which then instructs a few stepper motors attached to the cube how to proceed. The duo say that they’re currently in the process of applying for an official world record.

As interesting as that is, it still doesn’t hold a candle to Lucas Etter’s Rubik’s Cube world record of 4.9 seconds. In case you haven’t seen that video before, we’ve posted it below for your viewing enjoyment. The real “action” begins at about 2:40 into the video.