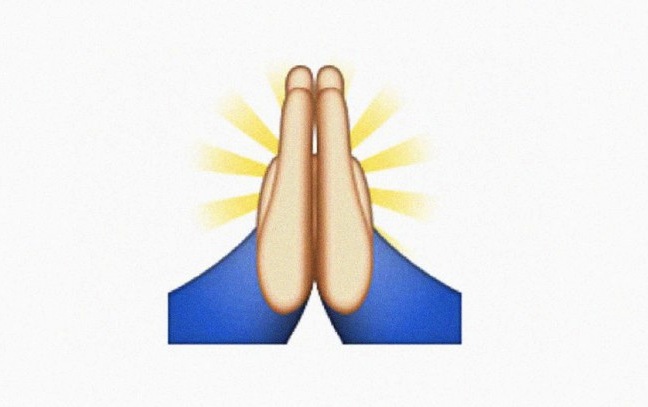 There seems to be some confusion about what certain emoji actually mean. Gawker brings us word that a TV station in Philadelphia described the emoji pictured above as being for a “high-five” of two hands slapping together, although it’s clearly supposed to be two hands held together in prayer.

How do we know this? Well, look at it: The angle at which the arms are bent suggests a meditative position while the sun rays surrounding the hands suggest some sort of divine power at work and not a mere hand slap.

And most tellingly, Gawker points out that both of the thumbs on the hands are on the same side, which is usually not something you see with high fives where people slap hands using their dominant hand — in other words, if two right-handed people are likely to use their right hands to give one another a high five, then their thumbs will be on opposite sides when their hands come together.

We bring you this announcement because if you mention to a friend that your mother is sick in the hospital and they send you this emoji, you shouldn’t interpret it as a high five but as a prayer for her health. Knowing this might save a lot of friendships in the coming years, people.