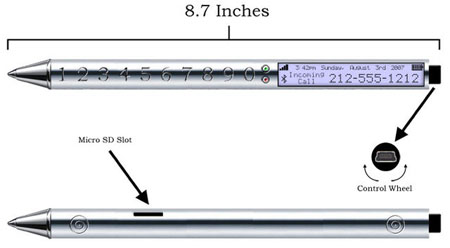 There have been some pretty silly phone concepts, and this one isn’t that much better. But, at least it’s got some kind of purpose. Well…two, actually. Anything called “PenPhone” should be pretty easy to figure out. It’s a pen…and a phone. As you can see from the picture above, it sports a decent array of features, including USB charging/syncing, a small LCD screen (that you can scroll with by using the twisty-knob-thingy on the end), and touch sensitive keypad. It even has a MicroSD slot, though it remains to be seen what that would be good for. You can’t view media on it, and we don’t imagine that anything that packed with tech would also be able to sport decent speakers. We don’t see a headphone jack, either. No doubt that iPhone fanboys won’t be tossing their beloved into the trash and lining up for this, but as a concept, we applaud the thinking. Supposedly, it really exists, though no one’s ever actually seen it in person. Suckers.