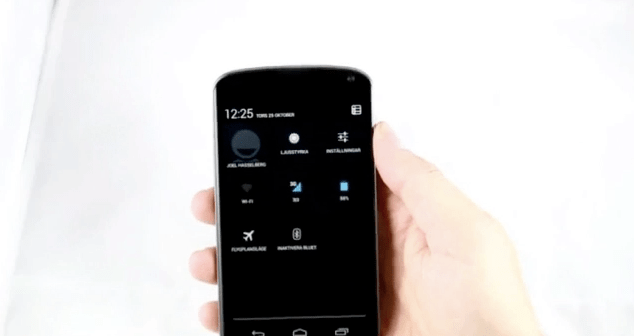 It was been widely speculated that Google (GOOG) planned to announce the Nexus 4 smartphone on Monday had its Android event in New York City not been cancelled. The rumored handset was confirmed to be built by LG (066570) and it was rumored to run an updated version of Jelly Bean, known as Android 4.2. Expected updates found in Android 4.2 included the addition of multiple users accounts and a new quick settings menu located in the notification bar, and now a video posted on Monday from Swedroid has confirmed as much.

The video — which has since been pulled from YouTube, but not before BGR downloaded a copy — gives us a first look at the Android 4.2 operating system and its performance on the Nexus 4.

The menu can be accessed through a button in the notification bar and includes options to control brightness, data and Wi-Fi connectivity, battery life, and toggles for Airplane mode and Bluetooth. The video also confirms that the Nexus 4 will use Chrome as its stock Android browser, similar to the Nexus 7.

A copy of the hands-on video of the Nexus 4 follows below.