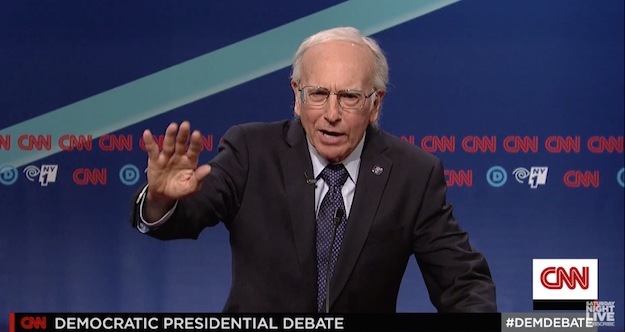 While Julia Louis-Dreyfus is naturally associated with Seinfeld and – more recently – Veep, you might be surprised to learn that she actually had a substantive stint as a Saturday Night Live cast member from 1982 and 1985. In fact, it was during her time at SNL during the 1980s that she first met Seinfeld co-creator Larry David.

Over the weekend, both Louis-Dreyfus and David returned to the comedic playground that is SNL where Louis-Dreyfus handled hosting duties. And David, predictably, reprised his spot-on Bernie Sanders impression during the show’s opening sketch.

Though familiar territory, the sketch – itself a parody of a Democratic debate – is certainly worth checking out. About mid-way through the sketch, Clinton (played by Kate McKinnon) and Sanders field questions from real New Yorkers, including (gasp!) Louis-Dreyfus’ Elaine Benes character from Seinfeld.

And from there, well, suffice it to say that the sketch is essentially a Seinfeld lovers dream come true.