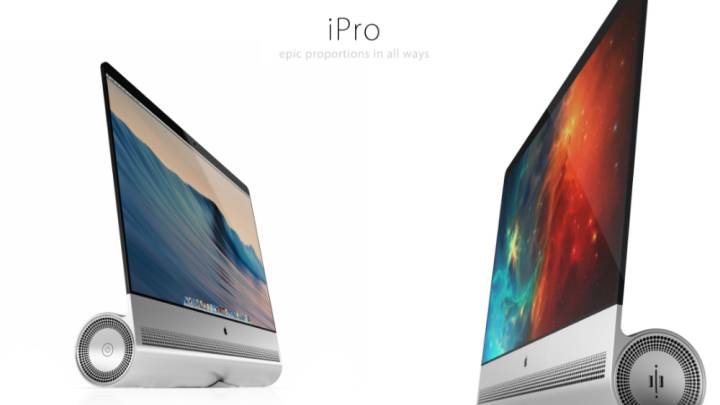 Celebrating the 30th anniversary of the Mac, long-time Apple fan Kurt Merki Jr. has imagined a new Apple computer that would incorporate some of the best features of the iMac, Cinema Display and the Mac Pro. The iPro all-in-one is a concept desktop for professionals that proposes “epic proportions in all ways.”

“The iPro is made for professionals who need a lot of everything be it memory, workspace or processing power. All components are cutting edge from the OLED display up to the integrated Mac Pro technology,” Merki writes. The iPro brings the best of both worlds. “Creating the right balance between performance and design. An ‘all-in-one’ enclosed solution that still has the capability of being flexible, enabling one to up- or downgrade easily.”

The iPro would pack an 8mm thin 35-inch OLED display with almost 4K resolution (3382 x 1964) that rests on a unibody base capable of incorporating two Mac Pro (late 2013) models, as well as additional components including up to four extra hard drives, a ventilation system and a complex sound system. The iPro also a variety of connectivity options including four Thunderbolt ports and eight USB 3.0 ports.

A tilt button in the front lets users move the display 20 degrees back and forth for optimal viewing angles, and makes sure the device actually doesn’t tip over. The iPro slightly resembles the Lenovo Yoga Tablets, only the all-in-once concept has huge proportions, and the base of the display is actually a lot bigger, packing the wits of the computer. When it comes to size, the iPro measures 800 x 600 x 150 mm, with the base having a 120mm diameter.

However, this is just a concept, not an actual Apple product. A gallery containing more images that highlight the features of this iPro concept follows below.