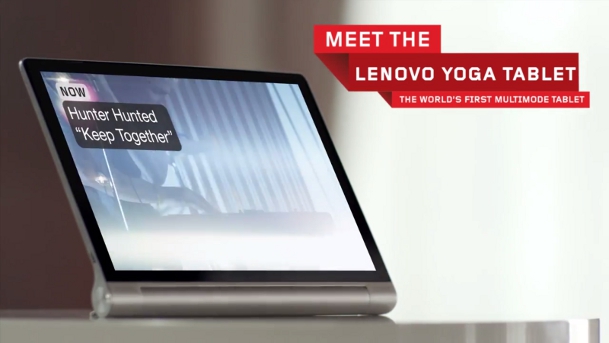 Undeterred by another recent tablet announcement, Lenovo has unveiled its own entries into the marketplace — the Yoga Tablet 8 and Yoga Tablet 10. The Yoga Tablet might not have the specs to compete with its competition, but what it lacks in screen resolution and processing power, it makes up for with 18-hour battery life and an adjustable kickstand like Microsoft’s Surface.

One of Lenovo’s main selling points for the new tablet is the range of modes the tablet can be used in. The cylindrical battery below the screen, which also contains the built-in kickstand, can be gripped for one-hand use of the tablet, which Lenovo is referring to as Hold Mode. When the tablet is standing straight up with the use of the kickstand, Lenovo calls this Stand Mode. The third option is Tilt Mode, which involves laying the tablet flat with the kickstand propping it up enough to allow for comfortable typing.

There’s no denying that this is a strange-looking device. The sleek design of the Surface, iPad and Samsung tablets has become the norm, but Lenovo has built a much more utilitarian tablet, one that can last longer and contort itself into whatever shape is most convenient at the time. Affordability will be a factor as well — the 8-inch Yoga Tablet will cost $249 and the 10-inch Yoga Tablet comes in just slightly more expensive at $299.

The Yoga Tablet will be available starting Wednesday, October 30th.