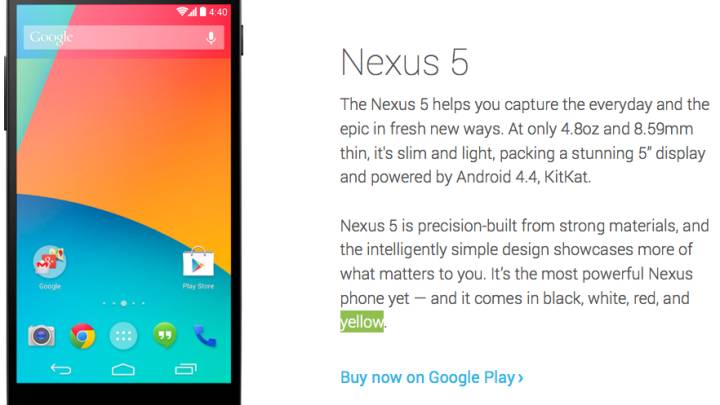 Google did not unveil new Nexus smartphones or tablets during its I/O 2014 opening keynote, but the company might be planning to offer fans a new Nexus 5 color option in the near future, and that’s yellow. In fact, the company has already listed it on its Android website, where Google+ user Android Luna spotted it, but the device is not available to order from the Google Play Store just yet.

This isn’t the first time there’s talk of a yellow Nexus 5, but this time around it’s coming directly from Google.

“The Nexus 5 helps you capture the everyday and the epic in fresh new ways. At only 4.8oz and 8.59mm thin, it’s slim and light, packing a stunning 5” display and powered by Android 4.4, KitKat,” the company writes, describing its latest Nexus handset. “Nexus 5 is precision-built from strong materials, and the intelligently simple design showcases more of what matters to you. It’s the most powerful Nexus phone yet — and it comes in black, white, red, and yellow.”

Obviously, there’s always the possibility a mistake has been made.

So far, the Nexus 5 is available in black, white and red on the Google Play Store, although the red option only comes in a 32GB flavor, as the 16GB model is out of stock.