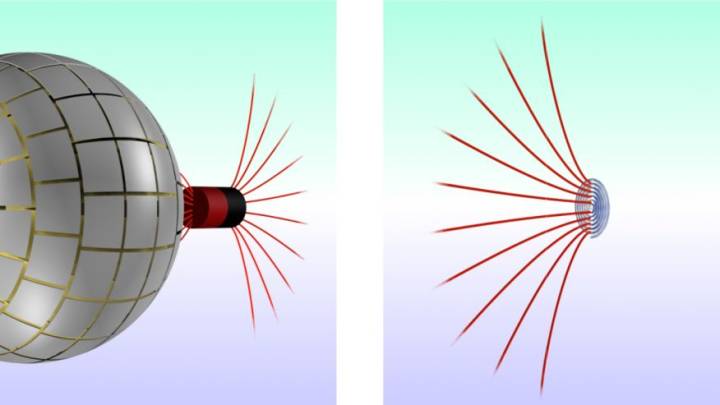 Researchers in Spain have created the first–ever magnetic wormhole in a lab. The specially designed sphere is capable of transferring a magnetic field from one location to another via a process that is magnetically undetectable and only visible by light.

The Autonomous University of Barcelona research team was inspired by the theoretical work of Allan Greenleaf, who, in 2007, introduced the concept of an electromagnetic wormhole that would transfer electromagnetic waves between its ends while the tunnel itself remained electromagnetically invisible. Actually building one, however, proved to be problematic as the materials needed were impractical and hard to work with.

“At a 2013 conference, we met some of the researchers that [came up with] this initial theoretical work and they suggested that we explore whether a wormhole for magnetic fields could be experimentally built,” study co-author and doctoral candidate in physics Jordi Prat–Camps told Foxnews.com. “This inspired us to start this research line. After some intensive research work we realized that the concept was feasible and we developed a magnetic wormhole design that could be realized with existing magnetic materials.”

Unlike the components needed to make an electromagnetic wormhole work, materials required for the magnetic version’s construction were much more readily available– superconductors, for instance, which carry high levels of charged particles and are capable of distorting magnetic field lines.

Once they reached a final design, it took about four months to build the actual wormhole and the setup necessary to measure their properties. This work resulted in a three–layered sphere — an outer layer with an iron magnet surface, a second layer consisting of superconducting matter, and finally a ferromagnetic cylinder that passed through the sphere to conduct the magnetic field. By using these metamaterials and metasurfaces to build the cylinder, the researchers were able to take a magnetic field from a source (a magnet or electromagnet) and introduce it to one end of the sphere before it appears at the other end while leaving no trace of the journey in between.

When most of us think of wormholes, we think of the famous gravitational ones that exist in space (as depicted in films like “Interstellar”) which allow anything that enters it to travel instantaneously between long distances. However, those hoping to travel through space and time with this new tech shouldn’t get their hopes up, as the wormhole Prat–Camps and his team have created works a little differently.

Prat–Camps believes that since magnetic fields are utilized in many different applications including electric energy generators, engines, and magnetic resonance imaging (MRI), this new technology could prove very useful in the near future. In the case of an MRI machine, for instance, a magnetic wormhole would make it possible to take pictures of a body with the powerful magnet placed at a greater distance, thus freeing people from the enclosed confines of the machine.

The study can be found in the journalScientific Reports.