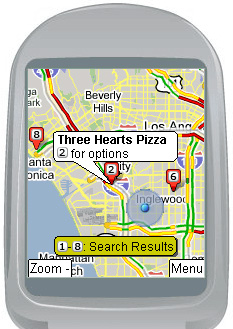 It looks like Google Maps for Windows Mobile isn’t the only thing getting updated. We’re a little late on this news, but we wanted to actually test it out before trying to explain it. The biggest new feature of Google Maps Mobile 2.0 is called “My Location,” and if used on a GPS enabled phone, it provides location mapping giving you a nice free alternative to the pay GPS mapping services. The real meat of this new feature, however, is what happens when you don’t have a phone with GPS, or even a clear GPS signal. Google Maps will now attempt to triangulate your position based off of nearby cell phone towers. Check out the review tested on one our Blackberry 8300s — no, not a BlackBerry 8310 — after the jump!

When just running off of the cell phone tower My Location will provide you with a basic zone where your location is. On testing, this has typically been somewhere in the neighborhood of 1,200 to 2,700 meters. The location was generally accurate, only once in our two days of testing did it show a location that I was not in, however not off by much. It seemed that the longer Google Maps stayed up the more accurate the location became. Eventually getting to within a block after a couple of minutes up.

This type of accuracy does not make for great turn by turn directions, or exact location support. So don’t expect this to replace GPS any time soon, although Google is working on improving the accuracy of this positioning. The real joy with this comes with the built in search, which like your normal GPS service, will provide you with nearby locations for what you are searching for. This proves handy for when you’re in an unfamiliar city and needing to get your Starbucks fix.

Currently this update is only being released for most modern smart phones. But it does work on various S60 devices, BlackBerrys, and the like. Windows Mobile currently is not supported It looks like some Windows Mobile devices are working. To check out the new build, simply point your mobile browser over to www.google.com/gmm