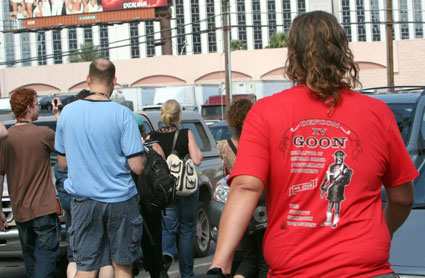 It’s one thing when you set up hidden cameras to spy on child predators…they’re the scum of the Earth, and quite frankly, could be considerably smarter. However, if you tip your hand to the fact that you’re intending to catch hackers on hidden camera admitting to crimes they’ve committed, apparently you can expect a little bit of a fight. NBC sent their hidden camera producer to the Defcon computer security convention in hopes of achieving their goal, only to find out that they had been followed from the get-go. Defcon staffers had been tracking the movements of Michelle Madigan since her flight took off, watched her rig herself up with her hidden camera setup, and followed her as she attempted to get her story. When the reporter was outed in front of an entire session of attendees, she quickly bolted for her car, with and estimated 150+ security personnel, reporters, and convention-goers in tow. Make the jump for picture hilarity.