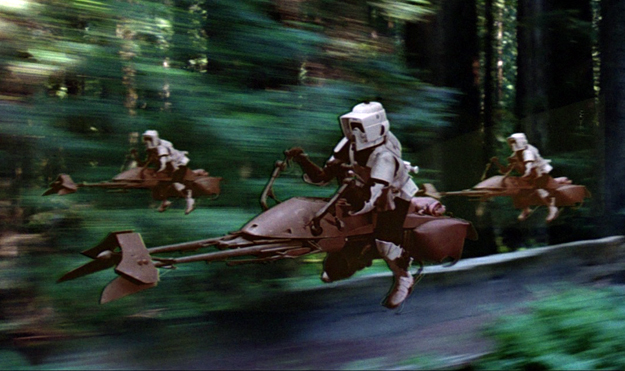 “Star Wars”-style hoverbikes could become part of America’s high-tech arsenal, as the U.S. Army Research Laboratory looks to harness the unusual technology for military use.

U.K.-based hoverbike specialist Malloy Aeronautics has joined forces with Belcamp, Md.-based SURVICE Engineering to develop the science-fiction-style vehicles for the Department of Defense. The two companies are working on the hoverbike as part of an ongoing research and development contract with the U.S. Army Research Laboratory, according to a statement released at last week’s Paris Airshow.

The technology may conjure up images of the ‘speeder bikes’ that appeared in “Return of the Jedi,” but could become reality. Malloy Aeronautics, which has been designing and developing the vehicles since 2009, says that the military hoverbike is being developed to operate as a new class of Tactical Reconnaissance Vehicle (TRV).

However, a spokesman for the company declined to discuss specific details of the military hoverbike project, and referred FoxNews.com to the Army Research Laboratory.

While the military partnership is attracting plenty of attention, Malloy Aeronautics told FoxNews.com that its technology also has great potential in the commercial sector. “It’s well suited to a lot of non-military and commercial uses, such as emergency services, agricultural use, search and rescue and moving cargo around,” said the spokesman.

Malloy Aeronautics’ first hoverbike prototype was a two-propeller bi-copter. However, the company decided that with currently available technology, it could not design a bi-copter cheaply enough for safe and competitive sales, so shifted its development to a four-propeller quadcopter.  The latest version of the technology also uses offset and overlapping rotor blades, designed to reduce weight and surface area.

Related: How drones are helping the Nepal earthquake relief effort

The hoverbike is being designed to function as both a manned and unmanned vehicle, opening up huge potential drone use. “Doctors and paramedics could fly their hoverbikes into disaster zones, assess the casualties and damage in local villages and then send their vehicles back to base as a drone, so they can bring back food, water and medical supplies,” the spokesman explained.

Malloy Aeronautics is “extremely happy” with its hoverbike development work, according to the spokesman, who noted that the technology is performing well in tests. He added, however, that it could be three to five years before the general public gets its hands on the hoverbike.

The hoverbike is 11.5 feet by 5.6 feet, and could reach similar altitudes to a helicopter. “The first prototype was estimated to fly at a height of 9,000 feet,” said the company’s spokesman.

Consumers eager to get a glimpse of the future technology can buy a 1/3 scale radio-controlled model of the quadcopter hoverbike from Malloy Aeronautics for $1,653.

The Army Research Lab has not yet responded to a request for comment on this story from FoxNews.com.