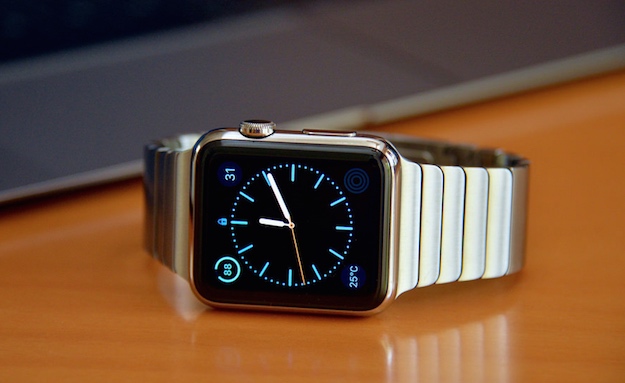 “The month had a challenging year-earlier comparison as exports rose 5.2 percent in October 2014, one of the biggest gains of that year,” the report notes. “Watch shipments, which make up about a 10th of Switzerland’s total exports, have declined 3.2 percent in the first ten months of 2015.”

The chart below highlights the immediate impact the Apple Watch had on the broader watch market. The Apple Watch was released in late April, and save for June, exports from Swiss watchmakers have fallen in every month since.

Though it seems to be happening slowly, it appears that Jony Ive’s 2014 prediction about the Apple Watch wreaking havoc on the Swiss watch industry might have been spot-on.

Recall this excerpt from The New York Times about 14 months back.

According to a designer who works at Apple, Jonathan Ive, Apple’s design chief, in bragging about how cool he thought the iWatch was shaping up to be, gleefully said Switzerland is in trouble — though he chose a much bolder term for “trouble” to express how he thought the watchmaking nation might be in a tough predicament when Apple’s watch comes out.

As for how the Apple Watch itself is doing, Apple still hasn’t released any sales figures for its new wearable. Still, Tim Cook has mentioned that the device, since its release, has sold more units with each successive quarter. With the busy holiday shopping season now in full swing, it stands to reason that Apple Watch sales will set a new quarterly record once Apple discloses its earnings results this coming January.

As a final point, it’s worth noting that initial sales of the Apple Watch were higher than what Apple saw with both the iPod and the iPhone.

“The Apple Watch sell-through was higher than the comparable launch periods of the original iPhone or the original iPad,” Tim Cook explained this past July during an earnings conference call.