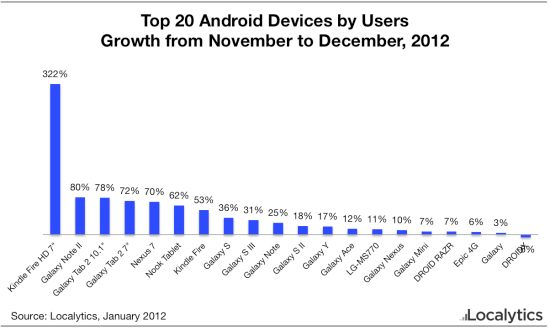 Following the successful launch of Amazon’s Kindle Fire tablet, Android vendors saw a beacon of hope in a market that had been dominated by Apple’s (AAPL) iPad since 2010. The Android tablet space has since become flooded with hundreds of products from a wide-range of companies, but there are only two companies that matter.

According to data from app analytics and ad service Datalytics, Samsung (005930) and Amazon (AMZN) are starting to run away with the Android tablet market, Venture Beat reported.

Ad impressions on the 7-inch Kindle Fire HD grew 322% from November to the end of December, while impressions on the Galaxy Tab 10.1 and Tab 7.7 increased a combined total of 150%. Google’s (GOOG) Nexus 7 and Barnes & Noble’s (BKS) Nook Tablet were the next closest with 70% and 62% growth in December, respectively.

The firm’s data also confirms Samsung’s dominant smartphone share, which saw a combined total of 214% growth in the past month.

The data also revealed that the iPhone 4S is still the most popular Apple smartphone with 40% of the market, compared to the iPhone 4’s 36% share and iPhone 5’s 18% share. On the iOS tablet side of things, the iPad mini is apparently selling a little slower than the iPad 4. The fourth-generation tablet had an 8% share of the iPad market, slightly higher than the mini’s 6% share.

Datalytics’ information comes from tens of thousands of apps installed on more than 60 million devices.