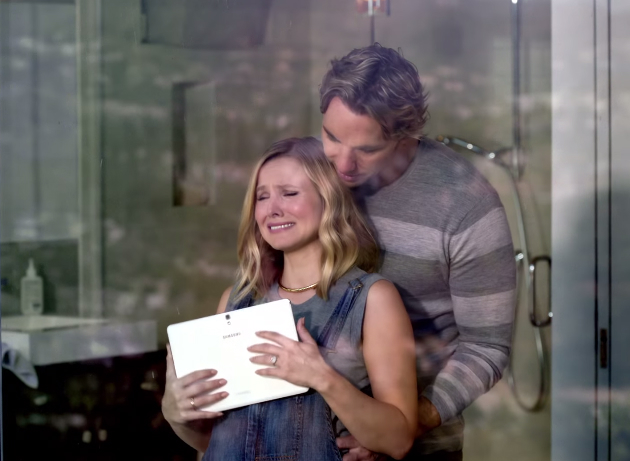 Samsung’s TV commercials aren’t only about bashing Apple products – or only about flagship smartphones for that matter – as the company has unveiled a new ad for the Galaxy Tab S tablet featuring well-known celebrities Kristen Bell and Dax Shepard.

FROM EARLIER: Samsung pits the Galaxy Tab S against the iPad Air in latest ad

The two actors, married in real life, star as themselves in a 90-second ad that shows the main features of the high-end Galaxy tablet during regular, daily usage. And Samsung seems to imply the Galaxy Tab S is so good that you won’t want to step away from it, no matter what you’re doing.

“Introducing the world’s most entertaining device, the Samsung Galaxy Tab S – you’ll never want to put it down,” Samsung wrote on YouTube.

The Galaxy Tab S, which happens to be Samsung’s most recent tablet launch, and one of its best to date, packing a high-resolution AMOLED display, is currently Samsung’s main weapon against Apple’s iPads.