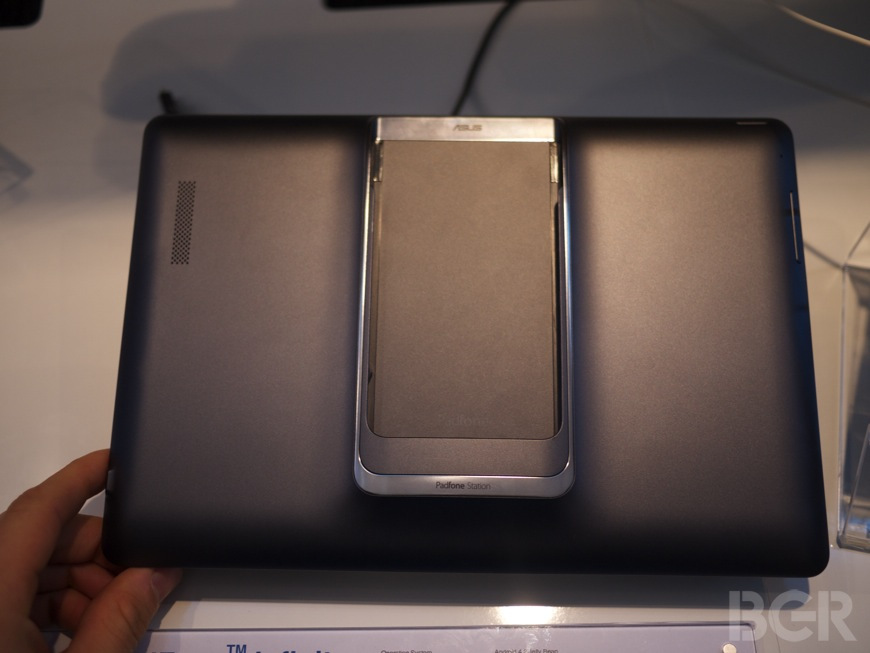 I admit it: I’m normally a sucker for hybrid devices that cleverly combine form factors or integrate functionality between smartphones, laptops and tablets. I really liked how Microsoft (MSFT) implemented the Surface Touch Cover, for instance, and I was also a fan of Motorola’s Webtop software that let you plug your smartphone into a laptop dock. There’s just one problem with many these hybrids, however: There’s no evidence that most consumers want to buy them even if they’re well implemented, as Motorola discontinued the Webtop platform last fall and Microsoft has reportedly sold well under 1 million Surface RT tablets.

All of which brings us to the Asus PadFone Infinity, a new attempt to create a smartphone-tablet hybrid that isn’t nearly as clever as either the Surface or Webtop. The PadFone Infinity tries to bridge the gap between tablets and smartphones but carving a niche into the back of a 10-inch tablet that you can then plug a 5-inch smartphone into.

The results, to put it mildly, look goofy.

The entire concept and implementation remind me of Japanese shows from the 1970s where one smaller robot would dock into an even larger robot for no reason other than Japanese audiences seemed really fond of big robots. In other words, unless you need a mobile device capable of fighting with giant lizard creatures on a regular basis, you probably won’t see the point of the PadFone Infinity.

As for the individual devices themselves, they’re nice but they aren’t really doing anything that other Android devices don’t already do better. The market for 10-inch Android tablets has largely fizzled out and Android fans have instead gone to the smaller Nexus 7 and Kindle Fire to get their fix, so it’s not clear why Asus (2357) thinks consumers really want a bigger Android tablet at this time. And while the phone part of the PadFone is well-built with a gorgeous display and top-notch specs, there’s nothing to really make it stand out on its own from other high-end Android devices such as the Galaxy Note II, the HTC One or the LG Optimus G.

And this is all before we get into the price point for the device: Asus is actually charging £799, or $1,200, for the PadFone. To put this into perspective, consider that you can buy both a 16GB Nexus 10 tablet for and an 8GB Nexus 4 smartphone without carrier subsidies for a grand total of $700, or just more than half of what Asus thinks people will be willing to pay for the total PadFone package.

And sure, you can’t plug the Nexus 4 into the Nexus 10 Voltron-style, but come on. The ability to plug a phone into a tablet dock is not worth $500. You’ve gone way too far with this one, Asus.