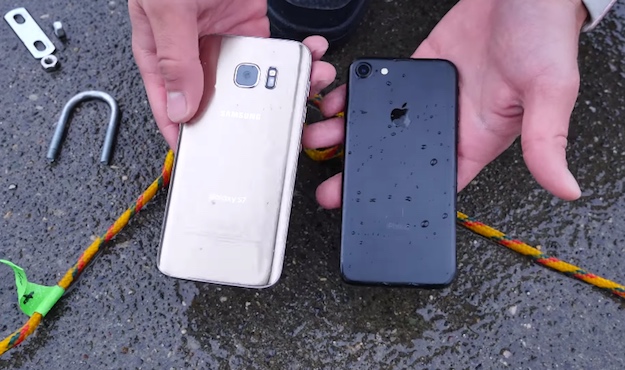 In what’s become something of a bizarre if not played out tradition, every new iPhone release is accompanied by no shortage of bend tests, water tests, scratch tests and any type of torture tests your mind can dream up. If you’re curious, for example, about how an iPhone 7 might fare against a hydraulic press, well, it’s already been done and recorded for your viewing pleasure.

Having said that, what we haven’t seen yet is how Apple’s new water-resistant iPhone 7 stacks up against Samsung’s Galaxy S7. To answer that question, the enterprising folks over at EverythingApplePro took a shiny new iPhone 7 and a Galaxy S7 and didn’t just opt to put them in a glass of water. No, these guys went the extra mile and sought to see which phone could hold up best when submerged in deep waters.

Before the festivities begin, we should note that the iPhone 7 and Galaxy S7 sport different water resistance ratings. The iPhone 7 has a rating of IP67 which means it can withstand being submerged for 30 mins in a meter of water. The S7 meanwhile boasts a more impressive IP68 rating which means it can survive 30 minutes submerged under a meter and a half of water.

With that disclaimer out of the way, let the games begin.

The first test saw both devices submerged to a depth of about 5 feet for 5 minutes. Upon inspection, both devices, not surprisingly, were still running smoothly after the 5-minute mark.

The second test saw both devices go down to 10 feet of water for 5 minutes. After pulling both of the devices out of the water, they were — surprise, surprise — still completely functional.

After a few more tests, it was time to up the ante. For the main event, both devices were submerged at a depth of 35 feet for 5 minutes. After retrieving both devices, the S7 had turned off and was not able to be powered on. The iPhone 7, impressively enough, was still functional though there were signs of water damage. All in all, the iPhone managed to pull this one out.