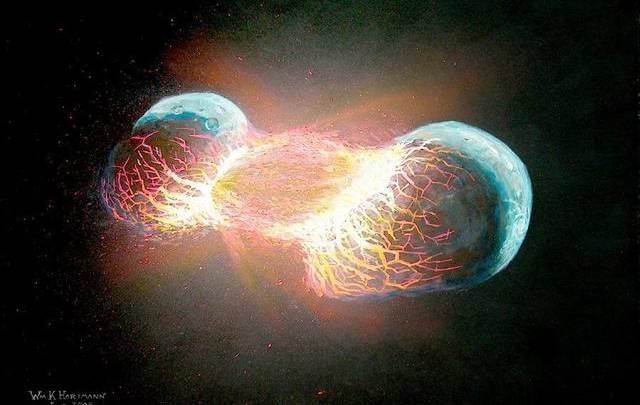 A new theory says Earth is made of two planets, rather than just one. Apparently, our planet is the result of a collision that helped map the course of both Earth as we know it and the moon.

According to new research from the University of California, Earth and a hypothesized early planet called Theia collided, and the two planets fused together 4.5 billion years ago. That impact also formed our moon, Science Alert explains.

The initial working theory was that the Earth and Theia only side-swiped each other, sending the moon into orbit and then flying away into space. But this new research says that Theia never left Earth and instead, it helped shape up our planet.

Scientists studied oxygen isotopes from moon rocks from the Apollo missions and volcanic rocks from Earth’s mantle. Since each planet has a particular oxygen signature when it comes to oxygen contents, they would be able to see differences between lunar soil and Earth rocks.

If Theia simply swiped Earth, then the moon would be made mostly of Theia, and the Earth and moon rocks would have different oxygen isotopes. However, the researchers found they have the same isotopes.

“Theia was thoroughly mixed into both the Earth and the moon, and evenly dispersed between them. This explains why we don’t see a different signature of Theia in the Moon versus Earth.”

The researcher also explained there’s evidence that Theia was a growing planet, still evolving at the time of the impact. The planet was similar in size to either Earth or Mars.

If confirmed, the research will help us better understand the origins and history of our planet. You know, as long as you believe Earth is a spheroid planet, and not a flat surface floating in space.